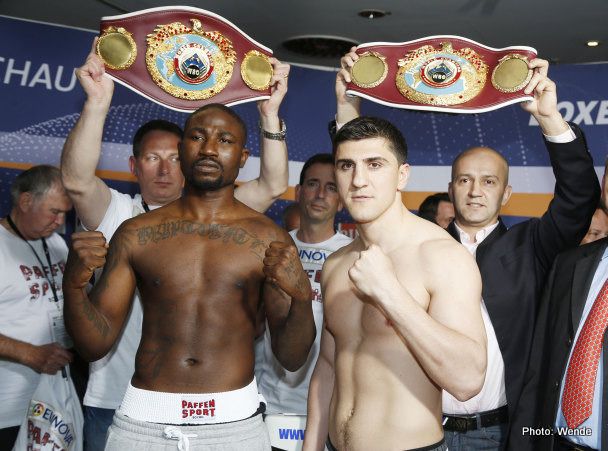 London’s Ola “Kryptonite”Afolabi played up to the German crowd in attendance at the official weigh-in for his third meeting with WBO cruiserweight champion Marco “Captain” Huck (35-2-1, 25 KO) which takes place tonight at the Max Schmeling Halle, Prenzlauer Berg in Berlin.

The Fight is being Shown Live in the UK on BoxNation, you can sign-up here to watch the action.

Afolabi and Huck’s rivalry goes back to December 2009, when the Serbian-born Berlin resident narrowly out-pointed the LA based Londoner in Germany. The pairs second meeting last year (May 2012) again in Germany ended in a controversial but competitive draw, with many believing Afolabi should have took the points decision and with it Hucks belt.

The previous two bouts have inspired a fiery atmosphere during the build-up for their rubber match, which promises to be just has fiery in the ring and hopefully this fight will finally decide this cruiserweight saga, but hey don’t rule out a 4th. Read More..