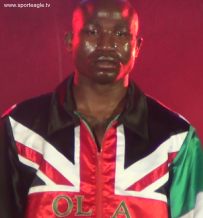 32-year-old British-born Ola Afolabi is currently training at Big Bear in California, anticipating a third go at reigning WBO cruiserweight champ Marco Huck. “Kryptonite,” as Ola is known, feels he suffered two bad decisions in his previous, exciting meetings with Huck, yet he is determined to prove he is the better fighter in the third encounter. Here the 19-2-4(9) warrior with the slick moves and the big right hand talks to British Boxers:
Q: You and Marco Huck will be fighting again soon, for a third time, as you are his WBO mandatory, correct?Ola Afolabi: Yes. Q: Will you look to make that your next fight, or will you take another bout in the meantime?
O.A: We’re trying to get another bout first, a ten-rounder to keep busy, maybe in December, but there isn’t that much time. But if not it’s no problem, I’ll be ready due to my sparring and my training. The third fight should be next year, he [Huck] has his T.V deals in place, so it should be in March – unless he runs back up to heavyweight!

Q: Huck and his team did “offer” Wladimir Klitschko 5 million Euros, but most people think it was more of a gimmick if anything……..?

O.A: I think it was a gimmick. Huck moved up and fought Povetkin, a small heavyweight who no-one really respects too much, and he did okay and he tried to use that performance to show that he could do it at heavyweight. But now, after he’s been exposed by [Firat] Arslan, there is NO WAY he will get a shot at the Klitschkos. No way will he make it as a heavyweight. Huck – Afolabi II

Q: Talking about the Huck-Arslan fight, I take it you saw it?

O.A: Yes, I saw that robbery. I had Arslan winning eight, maybe nine rounds. It wasn’t a bad decision, it was a horrible decision. Even the crowd that night, they supported Arslan, and they really booed the verdict. One judge even had it 117-111 [for Huck] and that is just totally ridiculous!

Q: You’ve had two decision fights with Huck of course: the first fight, do you feel you lost that one fair and square, but the rematch, scored a draw this past May – you know you won that fight!?

O.A: The first fight, I think I’d have got the win anywhere other than in his country. I knew I had to knock him out and I got what I deserved for not doing so. The second fight; oh yes (laughs) there wasn’t anything else I could have done to have got the win. But these bad decisions are what’s killing boxing. I mean, to get away with it once or twice, maybe – but to keep doing it again and again! This is just crazy. But the next fight (Ola-Huck III) will have the whole world watching, so they’ll see what it really is. Enough is enough with these crazy decisions. I actually feel bad for Arslan; he worked his whole life to get that fight and he’s in his forties. I think Huck should give him a rematch, but of course I want the Huck fight next or that’s money out of my pocket.

Q: Can you KO Huck this time? The thing about you two, you always make for a great, great fight!

O.A: Yeah. The thing is, everyone once in a while, a fighter comes along with a style that takes a lot of figuring out. Huck, for a time, had that style. But the thing is, he’s a bully. He charges at you, but if you don’t let him make you go backwards – and he is a strong kid – he has nowhere to go himself. He can’t fight going backwards. It’s strange, but now that Huck’s been exposed, I look and I think what I should have done in the first two fights I had with him. This time, I won’t go for the KO. The pressure on a fighter going into the other guy’s backyard in intense. When you know have to KO him to win, that pressure gets even greater. This time, I will look to school him and if the KO comes, it comes.

Q: Will you ever think about making a move up to heavyweight yourself, a fight against Povetkin for instance?

O.A: Listen, I’d fight Povetkin tomorrow! But he’s the only heavyweight I’d fight tomorrow. It’s a different game up there. I’ve sparred heavyweights my whole life, but it’s different with ten-ounce gloves on. You know, I want to make money and this is a business, but my health comes first. What’s the point in having money if you can’t enjoy it, you know? But in time, I’m 32 now, my metabolism may slow down – I find it quite hard making 200-pounds now – and if I get bigger, maybe I will move up. Then maybe I’ll start calling out names. But I’m not going to rush it like Huck has done.

Q: Another interesting bit of news at cruiserweight is the news that Eddie Chambers has moved down to 200-pounds. Chambers was one of the slickest heavyweights, would you be interested in a fight with him?

O.A: If the money’s right, I’ll fight anyone. At age 32 – and I’ll be 33 by the time I’ve fought for the title again – I haven’t got time to duck and run from anyone. So why not? But I think the hard fights he [Chambers] had as a heavyweight, the punishment he took, that may have ruined him. I think he should have gone up to heavyweight later on, instead of fighting up there at the start of his career.

Q: The cruiserweight division is great at the moment, with lots of names and good match-ups….

Q: Of all the names around, like Denis Lebedev, Arslan and others, a third Huck fight is your number-one priority?

O.A: Yes. Now that he’s been exposed – and I say to myself, ‘why didn’t I do this or that the first time?’ – I really think he’ll be in trouble against me. I hurt him the first fight, and in the second fight I scored a knockdown, but nothing was said and it wasn’t counted, even though his glove touched down. Like I say, I’ll school him this time. Interview by James Slater for www.britishboxers.co.uk pics by Tony Mayger 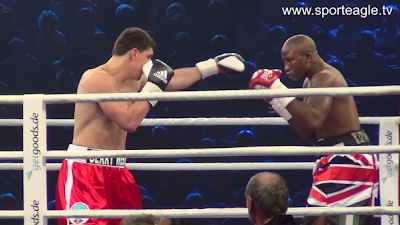