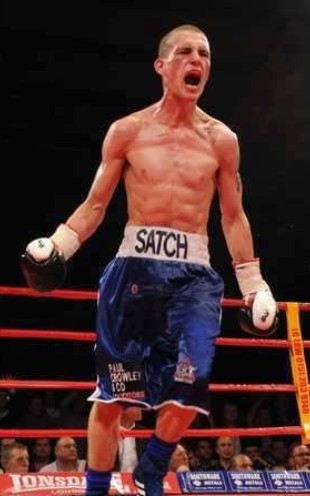 Satchell Climbs off the Canvas to Retain His Belts

Liverpool’s Kevin Satchell had to dig deeper than any other time in his short professional career, to overcome an inspired challenge from Motherwell’s Iain Butcher in the second defence of his British and Commonwealth flyweight titles at the Liverpool Echo Arena on Saturday night.

Butcher, 21, came to the ring first, as the challenger, to the accompaniment of the bag-pipes, a Scotsman in full traditional attire lead him to battle and his fans were making themselves heard around the Arena and he looked-up, for the biggest fight of his professional career.

Satchell, 24, since becoming champion, is growing into the role well, his boxing style is neat, tidy and text book. There is nothing flash or cocky about the champion, he just does most things correct and his superior skills have been the key to victory in his past fights, but this scouser also has a deep rooted will to prevail and a unbreakable toughness to go with his silky skills. He had already proven his credentials in his last two fights, against Chris Edwards and Luke Wilton, while here against an inspired Butcher, he had to prove them again.

The challenger shown early in the fight, that he’d crossed the boarder ready to rip the belts from Satchell in the champions home city, and from the very opening seconds of the fight, looked dangerous with his right hand, be it crossed or hooked, he was troubling the champion with it in the opener and it was a warning of things to come.

In the second round, Butcher again cocked the right, and as Satchell dropped his left and leaned into range, Butcher smashed him over the top with it, this time it had the desired effect and Satchell wobbled, as he felt the full impact. The challenger sensing his moment jumped on Satchell and winged away with the hooks. A left clipped the champions jaw and then a right hook dropped him, has he desperately tried to evade Butchers attack.

Satchell was up at the count of three, but he looked unsteady and ready to be relieved of his titles, by this tenacious challenger. There was still a minute to go in the round and somehow, Satchell had to clear his head, steady the legs and survive. After referee Steve Gray’s eight count, the fight resumed and Butcher went in for the finish, he wasn’t reckless and looked to pick the shots that would take out his wounded opponent. A couple more big rights from him crashed off the champions head and the British flyweight division looked like it had a new star. At this stage the fight looked odds on to end in Butchers favour.

Satchell used his feet well to stay out of range without having to dance too much on unsteady legs and them weeks of sparring rewarded him when it mattered and he used all his experience to see out a session that he had no right to make it to the end of. Butcher will probably still be cursing himself for not taking the gamble and giving it all he had for that last 6o seconds of the round, but the experience will stand with him in the future.

Massive credit goes to the champion for the way he dragged himself back into the fight, he went on to take the next round behind his jab and into the fourth had completely shaken the effects of the knockdown and was rattling off impressive accurate combinations. Butcher was still dangerous with his right hand and a couple of good left hooks got through, but Satchell now looked switched on, that knockdown had awoke something in him, he was now anticipating the shots from Butcher and when they did get through, he was shaking them off and coming back with his own scoring punches.

The rest of the fight pretty much played out the same, Butcher was always stalking, while Satchell boxed on the back foot. Butcher continued to have his success and landed some good shots, but overall, he fought too much at the same pace. You could sense his fans wanted him to let the hands go more and jump on Satchell, but with the knockdown, maybe he felt comfortable to look for the big shot again, but while he was, Satchell was the busier fighter, his piston like arms always throwing out the combinations, which ultimately saw him win the fight.

The tenth round was an eventful one, both traded off and dug deep, it was the part of the fight, that can so often sway the judges and the champions experience saw him home. The Butcher team bag-pipe player had appeared from the back of the arena and blew into bags trying to rouse the challenger for the last few rounds, but Satchell’s busier work took the unanimous decision. Satchell shown his championship quality to come back from that early knockdown to finish the fight strongly and deserved to keep his titles in the end, it was a good fight, credit to both.

Butcher came to Liverpool and nearly pulled off a monumental win, but he failed to rip the championships from the holder in his home town and he will go home disappointed, but I hope proud of his efforts, he has a bright future and will comeback from this loss a wiser and better fighter for it.

Judges scores; John Keane and Victor Laughlin had the it 115-113 and Marcos McDonnell 115-114. All in favour of Kevin Satchell.

Other Results from Liverpool Echo Arena and around the UK here