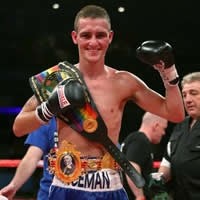 Satchell says the little men of boxing haven’t had the exposure in recent years as some of the heavier weights, but that could change with some exciting fighters like him, Paul Butler and Kalid Yafai coming through.

“I think we could be in for a period of change in the lighter weights with quality fighters like myself, Butler, Yafai and Jamie Conlon, plus Luke Wilton and Iain Butcher all in the mix,”

“Fans’ have their favourite weights and no doubt with the bigger guys you are more likely to see the knockout, but that doesn’t mean the smaller guys aren’t as exciting.  All those guys I’ve mentioned are good fighters and against each other there are some good fights to be made that will spark interest in the lower weights again.  I’ve beaten Wilton and Butcher and I’m sure that they will get title opportunities again pretty soon.”

“People are talking about me and Bulter on a collision course which would be great fight down the line between us.  He’s on his path towards the world title and I’m on a separate path with the British title in my sights.  I’ve got a lot of time for Butler, he great fighter and that would be a cracking fight in a year or so.”

Satchell is prepared for a hard defence against the experienced Quaye who’s stopped 16 out of 25 and his four losses have been all been on points.  His last loss was over five years ago against Don Broadhurst on points over twelve rounds in a Commonwealth Super-Flyweight title challenge.

He added, “I’d say Quaye is my hardest fight to date.  He’s never been stopped in his career and he’s had more knockouts than I’ve had fights.  The African fighters are a tough breed and it’s step up for me, but I’m looking forward to the challenge to prove I’m the real deal,”

“I’ve prepared long and hard for the fight, sparring with heavier guys like Ryan Farrag, Jazza Dickens and Tom Stalker, plus I’ve had Mike Robinson and Phil Smith, so it’s been a good camp and I need to produce the results on the night and keep hold of my title,”

“The world title is my dream, but nothing is more important than beating Quaye a week on Saturday as none of that will happen if I don’t come through.”