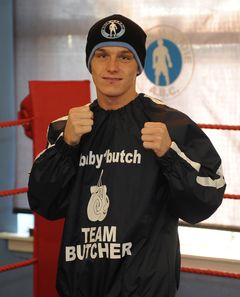 Iain Butcher Returns in June to take on Isaac Quaye

British BoxersMay 9, 2014
Fight ReviewsLATEST BOXING NEWS0 Comments3 min read
After seeing his British title fight against current champion Kevin Satchell postponed due to an ankle injury, Iain Butcher (10-1) will continue his assault on the flyweight division when he takes on tough Ghanaian Isaac Quaye in an eight round contest on June 6th.

Butcher, the current WBO European flyweight champion, is relishing the challenge of the respected Quaye (25-5-1, with 16 KOs) at the Ravenscraig Sports Facility in Motherwell.

The 22 year-old, who has stopped four of his opponents, said: “It’s good to be back on June 6th and I’m excited at the prospect of taking on a quality operator like Quaye. I’ve seen a few of his fights and I’ve no doubt I’m in for a tough night.

“Quaye took Kevin Satchell the full 12 rounds in March of this year in a Commonwealth championship challenge, so we know that he can fight.

“He’ll be looking to win to put himself back in contention for the Commonwealth title, but while it’s going to be a hard fight I’ve no doubt I’ll come out on top.”

Butcher’s promoter and manager, Paul Graham, admitted his man is facing a dangerous test, but he explained it has been hard to get a worthwhile opponent.

“We’ve had a few opponents in Europe on our radar for Iain, but no one seems to be interested in fighting him,” Graham said.

“We tried to make the British title fight with Satchell, but he’s injured at the moment so that has put Iain’s opportunity back a few months.

“It’s important to keep Iain active, so we extended the search a bit further and made the offer to Quaye’s team and they accepted. It’s important to get Iain in with a worthwhile opponent because he will gain nothing at this stage in his career by blowing away weak opposition and I think he will gain valuable experience from fighting a tough African.”

Graham, who jointly promotes the event with Chris Gilmour Boxing, added: “Iain is currently ranked number nine by the WBO, so a win against a more experienced fighter such as Quaye will also help push him up the rankings.

“Iain has recently had a training camp in Marbella and has taken on board a the services of a dietician, so it’s really coming together for him.”