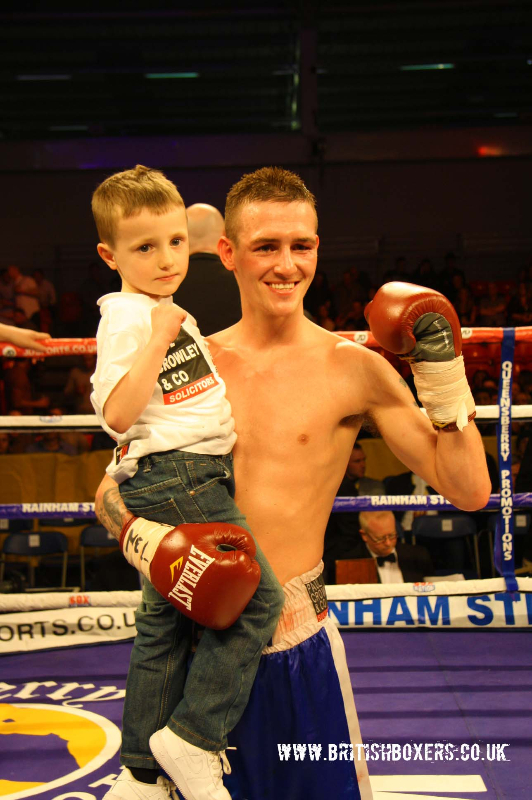 British and Commonwealth flyweight boss Kevin ‘Ice Man’ Satchell returns to action this Saturday when he challenges Belarus hardman Valery Yanchy for the European title before the Scouse faithful at The Echo Arena in his home city this Saturday. read more about this show.

Twenty six year old ‘Satch’ has barely put a foot wrong racing to 12-0 (2) and will be strongly fancied to become Britain’s first continental champion at eight stone for 14 years.

Kevin took time out from his final preparation to speak with boxing writer Glynn Evans.

You’ve successfully defended your Commonwealth title three times and twice retained your British belt now. Do you feel you’ve exhausted your options at that level?

Maybe. I’d have loved to have won the Lonsdale Belt outright, prior to challenging for the European.

However, despite successfully defending against Luke Wilton and Iain Butcher – the two best challengers in the division – both were deemed voluntary defences by the Board of Control so we’ve needed for a mandatory challenger to be established and that took time.

Eventually, they decided on Butcher but whilst training for him in May, I turned my ankle over in training and had to pull out. After that, the European shot was arranged and I’m confident I can win it.

After Saturday, my team will decide whether it’s worth dropping back to British level to get the belt or whether we’ll just defend the European to try to move up the world rankings.

Your son Alfie is always a prominent feature at ringside on fight nights. Tell us a little about him and his love for boxing.

He’s only six but already he’s mad for it. He’s got his own little gloves and punch bag plus a trackie with ‘Ice Kid’ printed on it!

He’s on it non-stop at the gym when I’m training and, after I’ve fought, he’ll insist on staying to watch all the other fights. He knows all the lads and probably has more boxing knowledge than I do. ‘Big Pricey’ (heavyweight David Price) was always his real hero until he got beat. Now it’s Floyd Mayweather!

Five months ago, I’ve had another son, Cody, so now I’ve got two little mascots. Everything I do is for them.

What aspects of your game have you been working on improving in the gym since we last saw you shutting out Ghana’s Isaac Quaye in a Commonwealth defence seven months ago?

For a start, I’ve begun to do strength and conditioning sessions twice a week at the Peak Performance gym in Liverpool. Obviously, I’m mindful not to put extra weight on so I just do light weights and stuff with medicine balls against my own body weight plus CV drills. It’s definitely made me fitter and stronger.

Also, since we got wind of the European title challenge, I’ve been working non-stop with southpaws to prepare me for the Belarussian. Jazza (Dickens), Jason Cunningham, Anthony Smith and Peter McGrail – who’s part of Team GB – have all been helping me out.

Boxing is soaring in Liverpool at the moment, with a rich batch of champions and contenders. How difficult has it been for Kevin Satchell to gain recognition?

The city’s littered with talent so it’s hard to stand out. To be honest, I’m just grateful to be a part of it all.

Saturday is my big chance to break out. Winning the European – my third title – in just 13 fights should get the boxing public to sit up and take notice of me. Hopefully, when we open the (news)paper on Monday, I’ll have the biggest write up in the boxing section.

Challenging for the European title in your home city is a huge opportunity. There must have been a real spring in your step through training camp.

Yeh, there has been. I’m really buzzing at the minute, knowing I’m on such a great bill with so many other title fights, knowing how many fans are coming out to see us. That certainly keeps you motivated.

I’ve given myself ten weeks to prepare. I’ve already done 68 runs and I’ve just two more to go. I run between three and four miles each time then have a long ten miler on a Friday. I’m averaging 30 miles a week.

Defending champion Yanchy might be 37 years old but he’s only lost three of 28. He finally won the European title at his fifth attempt so has plenty of experience at this level. What’s your assessment of him?

I don’t usually watch footage of my opponents but I’ve seen plenty of Yanchy on You Tube. My manager Neil Marsh and my trainer Paul Stevenson went over to Italy to see him win the title against (Italy’s three time world title challenger) Andrea Sarritzu last April so they’ve had a real good look at him and have been devising the game plan.

Yanchy is an awkward back foot boxer type. He’ll no doubt be trying to keep me on the end of his southpaw jab for as long as possible but he’s also pretty good with the uppercut in close.

I never like to give my tactics away but we’ve identified a few possible weaknesses which we’ll be looking to expose on the night. We’ve a few different plans we can resort to.

How important will the home fans be if the fight goes down the stretch?

Hopefully, they’ll be crucial. When I defended my belts against Iain Butcher at the Echo we both had a lot of loud support there and they really added to the occasion.

I expect the fight shall start cautiously as we get to know each other and work each other out. But by the mid rounds I expect it to develop into a cracking fight with a lot of heavy shots thrown from both sides. I definitely think it’ll be entertaining for the fans. I’ve personally shifted over 200 tickets and it’s great to know you’ve got the backing of your city. It does help push you on.

Yanchy holds a number 12 ranking with the IBF. If you are victorious on Saturday, how quickly could you be moved to world level?

Hopefully a good win will get me rated with a few governing bodies. A lot will depend on the level of my performance on Saturday as to the route and timescale we pursue.

But it’s only my 13th fight and I’m only 26. There’s no rush.  I expect to defend the title a couple of times and move up the world rankings gradually.

What do believe will be the deciding factor in bringing you victory on Saturday?

All the hard graft I’ve put in. I’ve worked far too hard to let this slip. Whatever way I choose to fight, I win because I’m bigger, stronger, younger and hungrier. I’m ready to step up.