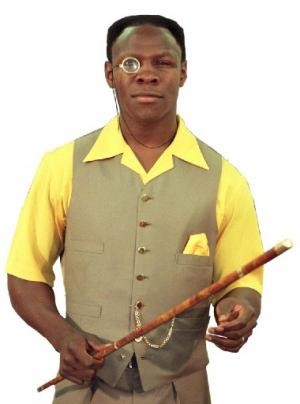 A few years ago a boxing writer opined that there had been so many good boxers and good fights a middleweight, because it was at 160 lbs that the (male) human body functioned best. There may well have been something in the theory.

Currently, there are 17 weight divisions in professional boxing, including two divisions that are beneath flyweight at 112 lbs. How much the sport has benefited from these new divisions is anybody’s guess, although it is clear that British boxing has not seen much activity in the micro weight classes. Neither is it really clear to me what benefit the super flyweights bring to the table, bridging, as they do, the six pound difference between fly and bantam.

Nigel Benn and Chris Eubank (pictured) had a rivalry at domestic level in the middleweights and when both men outgrew the 160 lb category, their feud spilled over into the new weight division. They first met in a defence of Benn’s middleweight crown; with Eubank taking the title via a ninth round stoppage in November 1990. Both were recognised by the WBO; boxing’s newest sanctioning body. With three such bodies already in place, the last thing the boxing world needed was another belt to throw into the maelstrom of champions and titles. But the involvement of Chris Eubank, Nigel Benn, Steve Collins and Joe Calzaghe worked wonders for the credibility of the fledgling organisation.

When Benn and Eubank outgrew the middleweights, they met again at 168 lbs, with the result this time being a draw. As men, the two could not have been more different. Benn with his Dark Destroyer tag was the snarling, uncompromising aggressor. Eubank, who wore a monocle whilst not practising his trade, never troubled to hide the fact that he was a long way from being in love with boxing; which he regarded as a brutal business, which he just happened to be pretty good at. At press conferences, it seemed as if Eubank had swallowed a dictionary and then finished his meal with a light thesaurus. If the enmity between them was manufactured to sell it tickets, it was a pretty good job.

Eubank was the master of the dark psychological arts. So when Irishman, Steve Collins claimed to have been hypnotised, and as such, could not lose, it got to Eubank and he duly lost his title to Collins. Eubanks was outpointed in a rematch and Collins went on to stop Nigel Benn twice in the space of five months in 1996 and was supreme at least in the eyes of the WBO, in the twelve stone division. Collins was never defeated as champion and retired in 1997, although there have been continual rumours about a last hurrah against Roy Jones Junior.

It looked as if British (and Irish) boxers were turning the super middleweights into their own personal fiefdom, at least as far as the WBO was concerned. When Joe Calzaghe won the vacant title in 1997 – against Eubank – it was the start of an era that is probably best described as the Calzaghe Era. The Welshman might have his detractors, but his record says it all. He never lost. Defences against such lesser known contenders as Branco Sobot and Tocker Pudwill are all part of a champion’s lot. By the end of his fabulous time as champion, Calzaghe had claimed recognition by three out of four of the main sanctioning bodies.