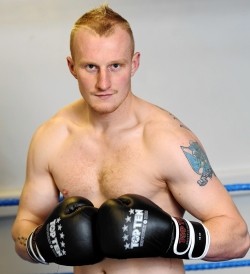 Paul Thomas on Joshua, Fury, Cornish, Towers and The Roads They Should Take

With the 2013-2014  season almost upon us, I thought this would be a good time to offer some ideas to our group of young heavyweight prospects Anthony Joshua, Hughie Fury, Gary Cornish and Richard Towers, on the direction their careers should take.

The most experienced of the group is the giant Scotsman Gary Cornish (pictured right).  The 26 year old has won all his 15 contests, with 7 inside the distance and yet outside his hometown of Inverness, fight fans know very little of him.  Why? Because his career up till now has been boring, boring.  Sure he’s won all his fights, but the calibre of his opponents have been awful.  Just an endless stream of unpronounceable names, with the exception of a couple of UK guys, who probably have trouble recognising the left glove from the right glove.

So here is my advice to Gary for the coming season.  Get out of this safety zone you seem to be bogged down in, and tell your handlers to get more ambitious with the choice of opponents.  Now here are some ideas.

A fight with that colourful Irishman Martin Rogan for the Celtic title would be a sell-out either in Ireland or Scotland.  I’m sure this would be an exciting contest and truly a “fun” fight for the fans.  Win or lose your next fight should be with Audley Harrison, another “fun” fight and if you really want a true test finally take on Michael Sprott.  If you should win these contests, then a challenge for David Price’s titles would give you a realistic chance of becoming Scotland’s first British heavyweight champion.

Now I come to Sheffield’s Richard Towers who’s been inactive for 14 months, in fact by September he would have only had two fights in 2years.  What the hell is going on with this guys career ?.   At 33 years of age he really needs to motor this coming season, that’s providing he’s got any ambition inside him.  I’m not sure if the lack of activity is due to the problems his handlers Hatton Promotions have had, injury, private problems etc. etc. but as he was due to box in Australia recently, I presume he is fit to fight and with Hatton Promotions tying up with Frank Warren and BoxNat. things should start to happen.

The first fight back should be against Audley Harrison and a win here would project the name Richard Towers on to social and boxing websites.  Then a winning  fight against  either John McDermott or Michael Sprott  would lead to a Britiah title showdown with David Price.  These are all “fun” fights the public would appreciate.  So Richard please no more boring opponents from you either.

Hughie Fury has already stated  that his immediate target is to become the youngest World heavyweight champion and although still only 18 years of age he will really need to “motor” to  take Mike Tyson’s record who was 20 years 5 months when he won the W.B.C. version and 21 years 2 months when he won the I.B.F. version and became undisputed champion.  By my reckoning young Hughie has got until about January 2015 to achieve his goal,  about 17 months approx..

It’s interesting to note that Hughie’s next fight, his ninth, will be against Shane McPhilbin  a cruiserweight  who’s best days are behind him.  Come on Mr.Fury if you genuinely want to beat Iron Mike’s record you need to be fighting better opponents after this one.

Here are some names you should be tangling with in the next few months. Sam Sexton, Albert Sosnowski, Tor Hamer, John McDermott, Vinny Maddalone and if successful you can then try your luck against the likes of Tony Thompson, Malik Scott or Deontay Wilder. Go for it Hughie, and try to become the youngest World heavyweight champion at least it will give us fans some “fun” fights

Although Anthony Joshua is yet to have his first pro fight the publicity machine is already in full swing.  An Olympic gold winner and with the mighty Matchroom  and Sky Sports behind him he is already  ahead of Cornish, Fury and Towers  in popularity.  So now we wait to see who his going to his first opponent.  I expect the same type of safe choice that Matchroom chose for Luke Campbell.  He will have losers record, almost certain to come from Europe, probably the Eastern section, and smaller in stature than Anthony.

What would I like to see, well ok I will go along with a couple of softies to start with but his third fight should be against Audley Harrison that would capture the fans attention and then an English title fight with John McDermott.