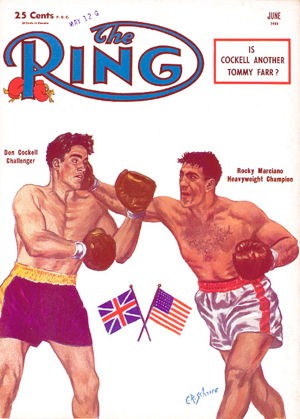 Paul Thomas: Marciano should have lost to Don Cockell

When it was announced in mid Feb. 1955 that Battersea’s Don Cockell was to challenge the mighty Rocky Marciano for the World heavyweight title, a disappointing  groan from fight scribes on both sides of the Atlantic was possibly heard as far away as the Australian outback.  The British press because they thought the British champion, was going to take the biggest beating in heavyweight history, and would be lucky to last four rounds.  The US press groaned because they had very little knowledge of Cockell, outside the fact he had defeated US fighters Harry Mathews, and Roland La Starza, and both of those had been destroyed by Marciano.  So the problem for them was how the hell are we going create interest about this fight, and how do we sell Cockell who already had lost 11 fights, 5 inside the distance, with his last defeat being against Randolph Turpin who was only a middleweight.

The fight was set for May 16, and the Kezar stadium in San Francisco was surprisingly  chosen as the site mainly because, Marciano had never fought in California and with Cockell being thought so little of as a challenger, the promoters gambled on people on the west coast would turn out just to see Rocky.

If the hardened US fight reporters were disappointed when the British champion was first announced as the next Marciano opponent, they absolutely felt sickened when Don arrived in America.  What they saw was a man of 5ft. 10ins tall, but weighing 15 stone with fat stumpy legs and rolls of fat around his midsection.  The newspaper headlines the next day described him has the “Waist of Time”, “Dumpling Don” and the “Glandular Globe”. The British press, as you would expect, were kinder and clung to the one chance that Cockell would cut Marciano’s nose and force a stoppage.   The reason for their optimism was, because in his previous defence the middle of Marciano’s nose was sliced open by a right hook delivered by the superb Ezzard Charles.  The blood just poured out and with the fight on the verge of being stopped, Rocky being the great fighter he was, found the big shots to ko Ezzard.

Eight months had passed since the Charles fight, and in that time Marciano had had two operations on his nose in the hope it would not split again.  It certainly looked as if the surgery had been successful because to the delight of the US press not even a scar was visible.

Now to the fight itself and the question should Don Cockell have won the World heavyweight title that warm evening in 1955.  I think yes, simply because he was fouled time and time again during this nine round massacre and should have been disqualified.

From the first bell Marciano took full control of the contest hitting the British champion with every punch in the book, and a few you won’t find in any book such as in round one elbow, shoulder and head slammed into Don’s body and head. Then to top it he took a vicious kidney punch seconds before the end of the round.

In round two and three Cockell fought back well and was certainly giving it at a go, but after the bell ended the third he was hit with a big right hand shot that made his legs dip.

You have to ask yourself where the hell did they find referee Frankie Brown from.  Not once during this one sided slaughter did he issue a warning.

So it went on.  In round four with Marciano ducking as usual below the waist-line he suddenly straightened up catching Don on the forehead, and causing a gash which worried Cockell for the rest of the fight.

So into round five and another low blow that caused Cockell to reel into the roped.  Marciano landed low again in round six, and then trapped Cockell on the ropes and landed three shots after the bell.

In the 7th Rocky’s head was banging into his extremely  game challenger, and yet another low blow at the end of the round.

A surprising thing happened in the 8th the crowd started to cheer for the blooded and battered British fighter who was showing gameness, they had never seen before, but he was being clubbed around the ring but was  always trying to fight back until he finally found himself draped over the ropes.  He pulled himself up but “Killer” Marciano showed no mercy and some more big hooks put Don on the canvas.

Cockell could hardly drag himself out for the 9th and you have ask yourself why oh why did his corner permit the slaughter to continue,and continue it did.  Another avalanche of punches smashed him to the canvas and again this truly remarkable fighter pulled himself up and immediately more clubs were upon him, and he went down again.  Yet again he pulled himself up, but thankfully this time Brown stopped the fight.

The next day the US press saluted Don’s courage.  The man they had once ridiculed had won their respect, but what a price to pay.

Don was never the same fighter again having only two more fights and getting stopped in both.

A modern day referee, especially a British one, would almost certainly have disqualified Marciano and this is what referee Brown should have done.  If he had because in those days champions protected themselves with the “return clause” contract,  Don would have had to face Marciano again.  So you have to ask yourself would we have wanted him to go through another battering on that scale.