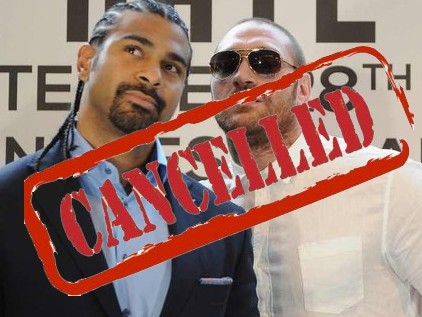 Peter Fury: If you want to pull a fight of this size so close then only a cut will do???

Following the call off on the Haye Fury fight because of a cut above Haye’s left eye in a sparring accident, Fury’s side have called off the fight completely and are not willing to reschedule.

Peter Fury said “We are not waiting on pathetic games. Wasted 10 weeks already on this crap. If you want to pull a fight of this size so close then only a cut will do???”

“We move on from Haye now and look for better things, its up to the public on what they perceive has took place here, but we want genuine fights. This has put a bad taste in our mouths, so were moving on, and the fight will not be rescheduled on our side.”

Fury’s promoter told  Telegraph Sport. “Tyson would not have been sparring a week from the event, so close to the fight. We wouldn’t have taken the risk. If he was sparring without a headguard, that is beyond belief at this stage. That wouldn’t have happened with Tyson”.

There will be a lot of important questions to answer from this unfortunate accident. What will happen with the undercard contest fights  involving Scott Quigg vs Yoandris Solis for the currently vacant World Boxing Association super bantamweight crown, and Andy Lee vs Domenico Spada World Boxing Council silver middleweight title fight?

Does this push the hopes of a fight for the would be winner with Wladimir Klitschko even further out of reach… , and what about all the fans that paid over the odds to get hold of a ticket which can now only be refunded at face value!