Haye-Bellew a fight of passion and pride 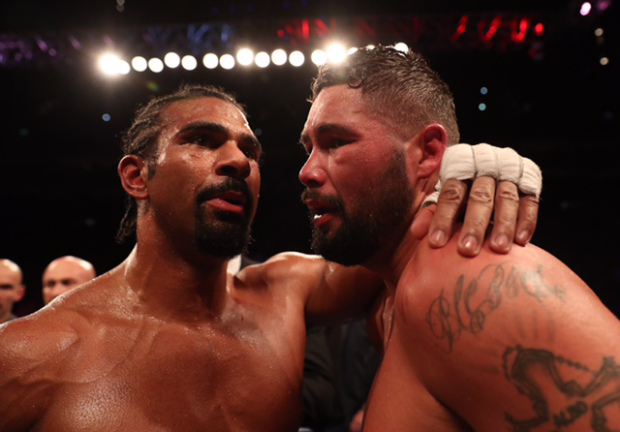 After months of social media build up and rising tension between the fighters, Saturday 4th March at the O2 Arena in London was always set to be an exciting night. It certainly did not disappoint.

With so much controversy surrounding the bout between David Haye (28-3, 26KO’s) and Tony Bellew (28-2, 19KO’s) who could have predicted that we would witness such a fight of passion and pride.

With Bellew coming off a succession of wins at cruiserweight and with Haye going into the fight having only boxed eight rounds of professional boxing over the past five years, there were questions as to whether Haye would have the stamina to box in a twelve round competitive fight.

A relaxed Bellew entered the ring looking confident and calm, clearly with a game plan in mind. Haye took to the ring, eager to make a quick start. With Haye being the heavier of the two, he may have had the greater power in his punches, but there was no doubt that Bellew’s agility would out pace Haye if he didn’t finish it within the first half of the fight.

The first round saw a couple of close quarter scuffles between the two men and was pretty evenly fought, but Bellew certainly took the second round, landing cleaner more calculated shots. Haye was swinging that left hook looking for an early knockout.

In the third round the pace slow down a little and both fighters were evenly matched. Haye tried to pull it back in the 4th with a right hook and in the 5th with a blow that left Bellew cut above the left eye. We were sure that this was the moment he might connect with that hard-hitting punch to finish the night, but it never materialised.

As we went into the 6th, Haye was growing weary and after a couple of bad knockdowns it became clear that he had badly injured his ankle. He was still determined though, and kept walking out and into Bellew’s punches.

Haye seemed to be dropping his defence completely in the 7th, 8th and 9th. Bellew was clearly up on points and all Haye could do was keep staggering back in to throw out some heavy hooks in the hope that one would land hard enough to stop Bellew.

In the 10th fans were amazed to see Haye still ploughing forward, determined not to go out without a fight. There were moments where the referee looked as though he was going to step in and stop the onslaught from Bellew, but Haye was still throwing punches.

In the 11th round Bellew caught Haye with a left hook that sent him reeling through the ropes and after struggling to climb back into the ring, his corner threw in the towel.

As the doctor rushed to Hayes corner, Bellew was celebrating momentarily before joining them to see that his opponent was alright. Mutual respect was shown by both fighters after months of undermining each-others abilities. They both proved to one another that they were worthy of the fight and seem to have left the ring on good terms.

Injured Haye was taken to hospital for treatment for a suspected rupture of the Achilles tendon and this could possibly mean being out of action for the rest of the year. Unfortunately for David Haye, the injury he sustained could have a devastating effect on his future. With this being only the third fight of his comeback career, some people are questioning whether the 36-year-old can recover and get back in the ring?

With reports that Bellew, the WBC Cruiserweight Campion, is targeting a fight with Deontay Wilder(38-0,37KO’s) and talks of a rematch between himself and David Haye, the “Bomber” must decide whether he should relinquish his cruiserweight title and continue his campaign in the Heavyweight division.