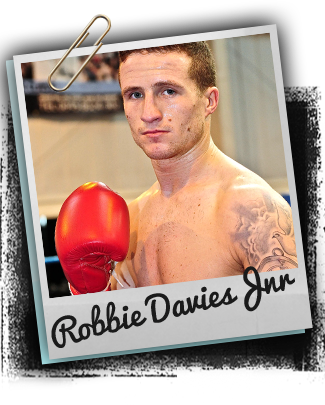 Robbie Davies Jnr – ‘A little something special about him’

“There’s nothing at all stopping him from going all the way.” Dave Tonks’ bold prediction about his impressive charge, Robbie Davies Jnr, is one that contains undoubted strength following the Kirkby youngster’s devastating start to his professional career.

Two first round wins from his opening pair of contests has seen the Merseyside man installed as one to watch over the coming years and he gets the opportunity to solidify his credentials with a further two outings before the year’s close.

Davies amateur accomplishments, plentiful by many standards, perhaps don’t tell the full story of the former Knowsley Vale ABC star who grew up a ring walk away from the boxing academia where John Conteh and Paul Hodkinson received their fistic education. An underachiever at senior level, Davies still performed admirably in several ABA tournaments and was rewarded by his country on multiple occasions. After missing out on a prized podium position with Team GB, Davies resisted many promoters to join forces with Dave Coldwell, and Tonks believes that his decision to punch for pay will be handsomely rewarded.

“I’ve been involved in boxing for a long time and I always knew Robbie had a little something special about him,” revealed Tonks.

“You watch him on club shows and you hear reports from people about performances but when you’ve got him standing in front of you on the pads and you’re watching him spar, it’s then when you realise what a special talent he is. He’s took to the pro game like a fish to water so far and I’m not surprised in the slightest to hear people speak well of him. It’s really up to Robbie how far he can go.”

With outings scheduled for the final two months of the year in Manchester and Liverpool respectively, Davies Jnr is already being fast-tracked by his team and will participate in back to back six rounders as he aims to build on his wonderful start. With a busy 2014 set to follow, Tonks fully believe that Davies Jnr will continue to get the right fights at the right time as he quickly looks to make a dent on the domestic rankings.