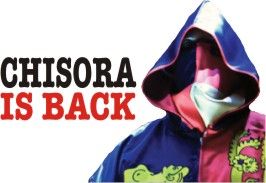 Chisora: ‘I’m Back in Business’ 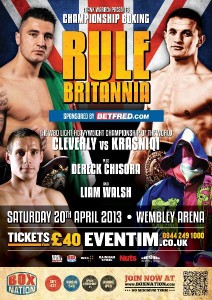 The hard-hitting Londoner has been out of the ring since July last year when he was stopped in the fifth round by rival David Haye in a thrilling fight at West Ham United’s Boleyn Ground at Upton Park that attracted over 30,000 fans – the biggest live boxing event in the UK last year – and one of the most exciting domestic heavyweight fights in recent memory.

He took WBC World Champion Vitali Klitshko the distance last February and pushed the long-reigning Ukrainian the hardest since Lennox Lewis nearly ten years previously, only to lose on the judges scorecards.

Chisora’s British Boxing Board of Control license was reissued last month after it was withdrawn last year and the Finchley puncher is now desperate to punch his way back into world title contention as soon as possible.

“I’m back in business and I’m on the road back to the world title,” Said Chisora.

“I’m looking to destroy Avila first at Wembley Arena and then face one of the other so called rivals next, if it’s David Price then great, I know he wouldn’t be able to stand up to my power and he’d be a good step in the right direction for me,”

“It’s exciting to be back in the ring after almost a year out. I’ve been working hard in the gym with my trainer Don Charles, making changes and improving, and we’re both tunnel focused on achieving the goal of winning the world heavyweight title,”

“I’m still only 29 and I’ve had only 19 fights, aside from Haye, I took Tyson Fury the distance despite not being in the best shape, I was robbed against Robert Helenius for the European title in his backyard and then took Klitschko the distance straight after,”

“The world title is my goal and I will achieve it.”

Remaining tickets for Rule Britannia, priced from £40 are available from Eventim on 0844 249 1000 or www.eventim.co.uk

Rule Britannia is live and exclusive on the Channel Of Champions BoxNation (Sky Ch. 437/Virgin Ch. 546). Join at www.boxnation.com