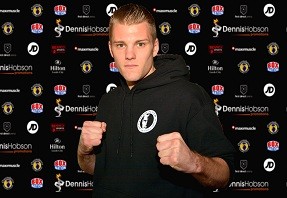 Dronfield’s Lewis Taylor (11-0) cannot wait to step into the bright lights when he appears on the undercard of Stuart Hall’s IBF world bantamweight battle with South Africa’s Vusi Malinga.

County Durham’s Hall locks horns with Malinga on December 21 at Leeds’ First Direct Arena and, with the show screened live on BoxNation, undefeated Taylor is promising to entertain and show the masses what he is all about.

“With it being on BoxNation it means more people will see me, which is what I want. I’ve done my apprenticeship, I’m 11 fights unbeaten and now I want to step it up and fight better kids.

“I like to entertain people, so it’s great that it’s on a big platform. I can work inside and outside and people always enjoy my fights because I’m willing to have a tear-up if I need to.”

Taylor is part of an exciting gang of young middleweight fighters. With the likes Billy Joe Saunders, Chris Eubank Jnr and John Ryder leading the way, Lewis is looking to get into the mix and is targeting another of the unbeaten young guns in 2014.

“I’d like to fight Adam Etches,” revealed Lewis, who works in an accounts office by day, “because he’s one of the big names around Sheffield. He’s someone who people are talking about and he went to the same school as me and we know the same people.

“So a lot of people would like to see that fight, and I think I’d beat him. I know Adam’s got a heavy shot and he’s won 12 of his 14 wins by KO, but I still think I’m better than him.”

“I call Lewis ‘The Fighting Accountant’,” said promoter Dennis Hobson. “He’s an intelligent, really nice lad but when he gets in the ring he’s a real fighter.

“We’re expecting big things of him. He’s had a good introduction to the game and we’ll be looking to move him on in 2014.”