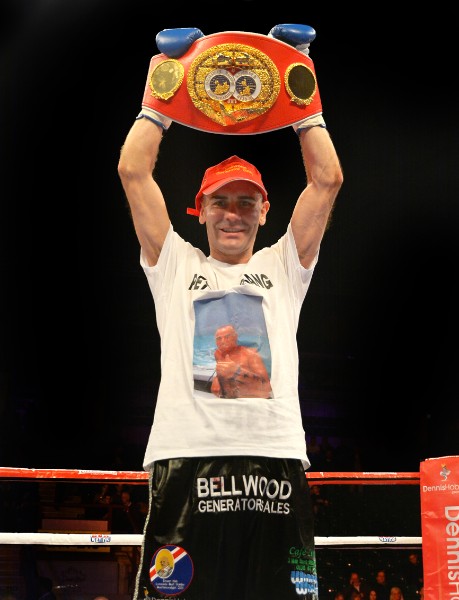 Both boxers accidentally clashed heads in the first round, and the bout was stopped in the second. Hall, 34, edged round one in his first defence of the title and said he was “gutted” with the outcome.

“I’m just gutted at the way it has turned out. The crowd has been robbed of a great fight. It’s one of those things in boxing though and I don’t really know what to say.” said Hall.

“It was a bad cut. I’m still champion and that’s the main thing in my eyes. I felt stronger and I started strong. Martin was warming up too but I felt like I had the strength in there.”

Hall (16-2-2) and 26-year-old Ward then contested a main event which would prove an anti-climax for a north-east crowd supporting two fighters from the region.

Hall, who became the oldest fighter to win a world title for the first time when he beat Vusi Malinga in December, looked in control in round one, but when he stretched to land a right hand his head collided with his opponent’s.

“The fight fans have been robbed. It was only a round a and half. That would have been a terrific fight. Everybody knew Stu was the stronger lad. I was sticking to my game plan and it was starting to gel nicely.” said Ward.

“Stu feels deprived of saying he was world class tonight, and I feel deprived that I have not had the chance to prove that I’m at the same level that I believe I’m at.

“The North-East still has a world champion and good luck to him. He is a very good fighter. He is the best bantamweight in the world. Paul Butler is far too small in my opinion, Stu will keep his belt for longer.”

“We’ve been robbed of a bit of drama. There is always drama in a fight of this magnitude. The first time two North-East kids have been together for a world title.

“There was a sense of expectation. But it was dangerous, a terrible cut. There is nobody stronger than Stu, you can tell he has grown in stature and looks a mountain at bantamweight.

“Stuart will take some beating for a long time to come. People saying what about a rematch, that’s a bad cut, he might need plastic surgery on that.

“IBF rules are that Stu should defend by June 21 and there are two kids fighting an eliminator for the number one spot. We’ll see where we get to and will consult with the IBF.”

The 28-year-old was knocked down for the first time in his professional career when he walked on to a left hand from the WBO Africa champion.

But he regained his composure to comfortably win on all three scorecards and take his record to 19-0.

Former Olympian Bradley Saunders, 28, maintained his unbeaten record with a ninth win – stopping Mitch Ward with three knockdowns in the fourth round.