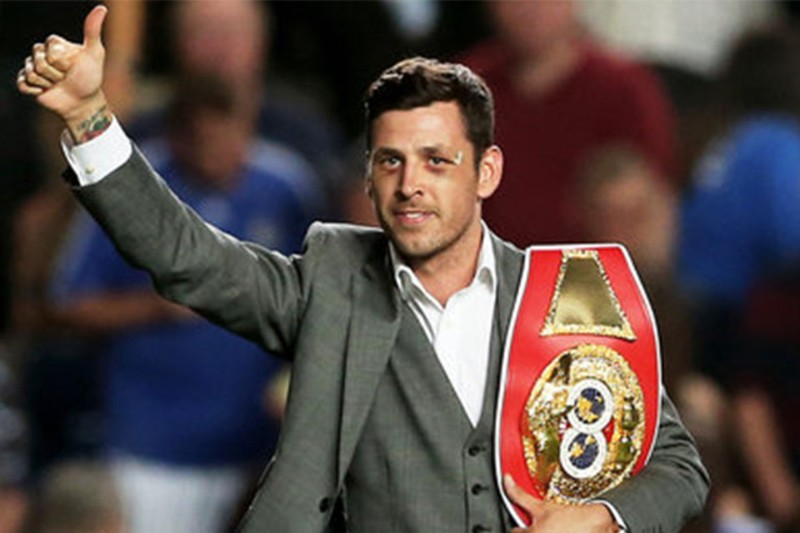 The popular Londoner topped the World in 2013 when he climbed off the canvas to rip the IBF belt from Daniel Geale in Atlantic City. Barker’s glorious night crowned his professional achievements adding the top honour to British, European and Commonwealth titles and his Commonwealth Games triumph in 2002.

Barker defended his title against Felix Sturm in Stuttgart in December, but his old hip injuries flared up during the contest and the 31 year old has taken the decision to bow out from the sport – and dedicated his success to his family, friends, fans and his late brother, Gary.

“I’m so proud and happy at what I’ve achieved when I won my first national title as a kid I could have retired a happy boy then so to have won all the major titles possible for me I’m a very, very happy man,” said Barker. “I did this all for my brother Gary – we did it mate! I’m now looking forward to sitting back and being a keen fan and wishing all my fellow countrymen all the best in their careers.

“I would like to thank my family for their support without them none of what I achieved would have been possible. My fantastic friends and all the fans that brought tickets to my fights and travelled the country and world supporting me I really appreciate it and thank you.

“Tony Sims – he constantly got the best out of me and he’s more than a fantastic trainer, he’s a mentor and very good friend. Eddie Hearn and the rest of the guys at Matchroom Sport for getting me the big fights and elevating me to another level and ultimately getting me the fight that helped me realising a dream and I’ve also met some friends for life there.”

Barker’s promoter Hearn led the tributes to the first fighter he signed in Matchroom Sport’s return to becoming a powerhouse in boxing.

“It is with both sadness and joy that Darren Barker announces his retirement from the sport today,” said Hearn.

“Darren has been an exemplary role model for any young fighter and a wonderful ambassador for boxing having won the Southern Area, British, Commonwealth, European and IBF World middleweight titles in a career spanning nine years.

“The sport of boxing is in Darren’s blood. He learnt his trade at the World renowned Repton club, where his Father Terry captured the ABA flyweight title and his brother Gary, who some say was the one of the best young talents the country had ever seen, also donned the green and gold vest.

“Darren has overcome many adversities in his career. The greatest the loss of his brother Gary at just 19 but a series of career-threatening injuries have made Darren’s journey even more remarkable and no-one will ever forget that magical night in Atlantic City on August 17th 2014, when Darren realised his dream by capturing the IBF World middleweight title against Daniel Geale.

“Unable to run in his preparation for that fight, Darren adapted his training and summoned the most incredible amount of mental desire to win. I will never forget Michael Buffer’s words ‘and the new’, a moment that made us all so proud but no one more than his late brother Gary. I feel that night took a piece of Darren’s soul and whilst in his preparation for the Sturm fight he showed the same amount of intensity and desire, the damage on his body and numerous operations meant that he was unable to give Felix the fight he needed to defend his title.

“After the changing room tears, a visit to the hospital for treatment to his hip and the disappointment of losing his World title, Darren’s family a friends made their way back to the hotel. We shared a beer and just by looking in his eyes I knew it was all over but Darren Barker was at peace, the struggle was over but he had achieved all he ever wanted.

“For me personally, Darren was my first ever signing as a promoter. His trainer and perhaps the most influential man of his career Tony Sims convinced me to return to the sport and Darren would be the beginning of Matchroom’s resurgence. After re-capturing the European title and suffering a string of further injuries, we manufactured a shot at WBC Middleweight champion Sergio Martinez. Even back then, Darren and the team never knew when the last fight would be so and opportunity like this was golden and despite the loss, Darren was outstanding and showed his ability to compete at elite World level. It was an experience that I feel played a huge part in him becoming a World Champion.

“After the Martinez fight came more injuries and a second hip operation and his return to the ring was set for nearly a year later against Simone Rotolo, September 7 2012 at the Alexandra Palace. He looked as well as I’d ever seen him and with just two weeks to go, tore a bicep in a freak sparring incident and had to pull out of the fight-It looked like the final straw. Darren told the team and his family that that was it, he couldn’t take any more and he was set to retire from the sport. Tony and I tried relentlessly to convince him not to, knowing that the demons of an unfulfilled dream would be tough to bear.

“When we got Darren back in the ring that December against Kerry Hope, he was a different animal. More determined than ever, a more aggressive style that lead to impressive stoppages over Hope and Rotolo just a few months later. Darren and Tony called for the Geale fight and we delivered, the rest as they say is history.

“That night in Atlantic City was for me, as many of us, one of the greatest of my life but what makes me happier is that Darren can leave the sport in peace. He can retire financially secure ready to spend time with his fiancé Gemma, his daughter Scarlett and his brilliant family knowing that he achieved the greatest dream of all and no-one can ever take that away from him.