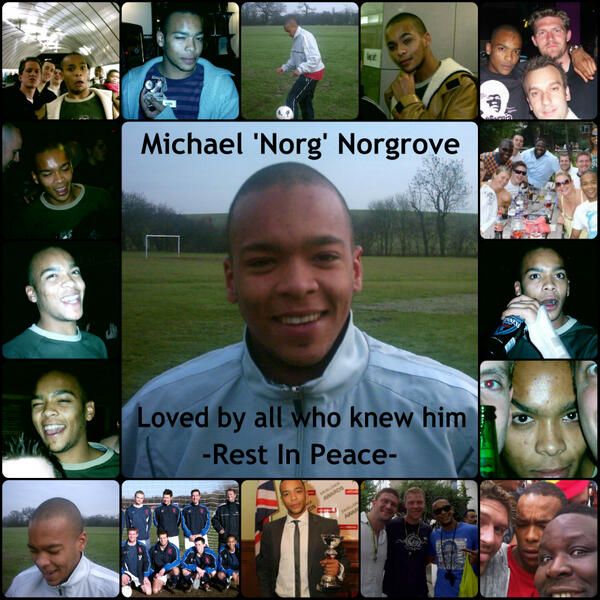 It is with great shock and sadness that we report the passing of Light-middleweight boxer Michael Norgrove, who after spending nine days in hospital following his fight against Sedgley’s Tom Bowen last week, died this morning, he was just 31 and had suffered bleeding on the brain and after undergoing an operation to remove it never recovered in the days that followed.

Michael who was born in Zambia, his father was British and worked the railways in the African country. When Michael was seven, his family fled Kabwe, formerly known as Broken Hill, in Zambia because of political unrest, moving first to Australia then Manchester, where his father was originally from. He was since based in Woodford Green, London.

Michael had started boxing on the white collar circuit before having a successful amateur career at the famous Repton Boxing Club. He turned professional in April 2010 and was unbeaten in 5 fights going into the 6 round contest against Bowen on March 31. Michael was way on his way to winning his 6th pro contest having dropped his opponent in the first round and boxing well up until the 5th round when the fight was stopped when referee Jeff Hinds, stopped the contest, noticing unusual behavior in Michael, who then collapsed. The fight will forever be recorded as a no contest.

He had taken no sustained punishment in the fight and according to fellow professional boxer and house second on the night Phil Gill, who had wrote on the BoxRec.com forum the following day: “It was a horrible thing to see happen. He hadn’t taken a single big shot so [it] makes you wonder where the damage was done … the oxygen and [doctors] were in there within seconds.”

“It was a horrible thing to see happen he hadn’t taken a single big shot so makes you wonder where the damage was done. [He] was up in the fight having dropped the other lad in the first round.” wrote Gill

“I know refs and the board get slagged a lot but I felt Jeff Hinds [the contest’s referee] was spot on in calling a halt to the fight before Mike collapsed and never got hit with anything. [It] was well spotted. The oxygen and docs were in there within seconds.”

Gill then posted this afternoon: “He put up a hard fight. [There were] lots of complications after surgery [he] was up and down they took him off the sedation and ventilators few days ago and it was a matter of waiting for him to wake up but .. xxxxx”

The stricken fighter was treated at ringside and rushed to hospital, where he was found to have a blood clot on his brain and underwent emergency surgery. News in the week was that he was stable, but today the news came through to British Boxers that Michael had lost his fight for life and boxing had lost a brother. Our deepest sympahese are expressed to his family and friends at this moment and on behalf of the fight fraternity we mourn Michael’s death with you.

Some of the many Messages on Twitter for Michael #RIPMichaelNorgrove

(Cover Pic) “Some pics i put together of my very good friend #michaelnorgrove will miss you loads mate.” RIP Norgy – Darren Perry

“RIP Michael Norgrove it’s so unbelievable what has happened to this young man. A kind and warm human being, a very talented boxer.” – Steve Goodwin

“Thou I didn’t know you, anyone who has worn the green and gold colours of repton is a brother of mine. RIP Michael Norgrove.” – Darren Barker

“My heart goes out to Michael Norg Norgrove and his family at this tragic time of Mike’s passing yesterday. Mike was a champion inside and out of the ring God Bless brother x – Spencer Fearon

“Gutted to hear about Michael Norgrove passing away. It’s a hard, hard game we do. I wouldn’t wish it on my worst enemy. God bless him X #RIP – Paul Smith Jr.

“I’m absolutely gutted to hear about the death of Michael Norgrove. I never met him or even knew him but our sport has lost a gentlemen RIP”. – Anthony Ogogo

“Thoughts are with his family and friends right now. Such sad news”. – Anthony Crolla

“Woke up to shocking news Michael Norgrove who had the bleed on the brain sadly passed away Thoughts are with his family”. Kieran Farrell

“Terrible news about Michael Norgrove!! Just shows you that the game we’re in is NOT a game! … God rest his soul!! – Scotty Cardle

“When such a talented, charismatic, good-natured individual is taken from us, that old maxim, ‘Only the good die young,’ has never seemed so resonant”. – Ben Doughty

“Rest In Peace Michael Norgrove, absolutely tragic news . Boxing is not a game. Thoughts go out to his family and friends.” – Kugan Cassius

“RIP Michael Norgrove, True gentleman who died what he loved doing, thoughts and prayers go out to his family from everyone in #BOXING”. – M Amoo-Bediako Sr

“Just seen the worst news in a long while! Rip Michael won’t be forgotten! Big big shock! Life is to short!” – Danny Swallow