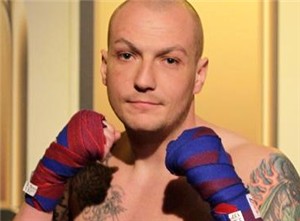 ‘Dynamite’ Dilks to Explode in Southport on Cruiserweight Debut

Liverpool’s Carl ‘Dynamite’ Dilks makes his cruiserweight debut live on VIPBOXING.TV when he tops the bill at Southport’s Floral Hall on February 28.  The 30-year-old, who has previously fought for English and Commonwealth honours at super-middle, knows he doesn’t have forever left in the game but believes the move up in weight will signal the most successful period of his career.

“To be honest, I’m getting on now.  Since my last fight I’ve gained a lot of muscle,” explained Carl, who has recently employed the services of a dietician.  “In the past I’ve been doing the weight the wrong way.  At times it hasn’t been my fault because I’ve had short notice for title fights, and I’ve taken those fights because they were opportunities I thought I could’ve won.  But draining myself to make weight wasn’t the best way to go about it and I got chinned!

“I’m feeling good and strong at cruiser though.  I might even have a six pack for my next fight, and I’ve never had one in my life!  When I spar in the gym with bigger lads I more than hold my own, and I feel good doing it.  So I’ve thought I’ll have one last good go at it this season; step up to cruiser and see how we do.  If it doesn’t work then I’ll maybe go back down to light-heavy, or even call it a day.  I don’t know yet.  It’s a big gamble but it’s one I think will pay off.”

After a period of stagnation, the domestic 14st 4lbs division is vibrant again.  Birtley’s Jon-Lewis Dickinson currently rules the roost but a queue of contenders are jockeying for pole position behind him, and Dilks is confident he can get into the mix.  With just six defeats in 23 outings, the former squaddie has the experience to make an impact and says he is hitting harder than ever and can finally achieve his dream of winning the Lonsdale Belt.

“They’re all good,” assessed Carl on the current crop of cruiserweight contenders.  “You’ve got Matty Askin, Neil Dawson and Tony Conquest, who’s fighting for the Commonwealth belt.  He’s good and if he wins then I’d like to fight him for that title.  There’s some good fights out there and there’s no-one who I think is unbeatable.  I’ll be going up totally confident that I can more than hold my own.  And I know I’m punching a lot harder because my wrists and hands are killing me!

“I’d love to fight for the British.  I’ve had an unlucky career, things that could’ve gone my way haven’t, but I can’t walk away until I’ve fought for it.  And to win it would be a dream come true.  If I’m totally honest, it’s make or break.  If I haven’t done it this year then that’s it, it will be time to hang the gloves up.  I’ve had a good go and I’d just like to finish it off with a good season and hopefully fight for, and win, the British crown.”

“I still believe that there are major fights out there for Carl and that he has it in him to win domestic honours,” revealed promoter Steve Wood.  “He’s in very good shape, is looking great in the gym and if he can perform in the big fights then there’s no reason why not.  He’ll be fighting for a British Masters belt in Southport and he’s asked for a real test, and a proper sized cruiserweight, and that’s what we’re looking for.  If he wins we’ll look to move him on as quickly as possible.”

Tickets, priced at £30 (General) and £60 (Ringside), are available from all boxers or at vipbe.co.uk