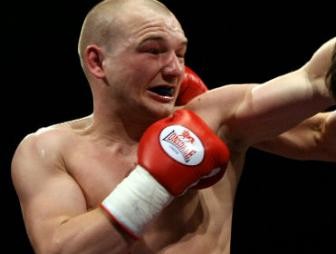 Gavin Rees: ‘It’s all on the line for me, if I lose its curtains’

Gavin Rees says that defeat against Gary Buckland at the Motorpoint Arena in Cardiff on February 22 would spell the end of his career.

The former WBA World Light Welterweight champion was stopped by Adrien Broner in Atlantic City for ‘The Problem’s’ WBC Lightweight crown in February and followed that with a slender defeat to Anthony Crolla in Bolton in June.

The 33 year old now tackles his fellow Welshman in an eliminator for the British title live on Sky Sports, but there’s more than just a shot at the title on the line for ‘The Rock’.

“If I lose to Gary I think that would be the end of the road for my career,” said Rees. “It’s all on the line for me, if I lose its curtains.

“2013 was the worst of my career. Two fights, two losses and some injuries, things can only get better this year. I want to start off with a good win against Gary, who is a really talented fighter that likes to come forward just like I do, so it promises to be a really good fight for the fans. We’ve sparred lots of rounds and if that’s anything to go on, it’ll be a great fight.

“I’ve been on the road for the last few years so it’s great to be back in Wales and on a big show. I love fighting, I’ve been doing it for 20 years and with a good win on February 1, I think I’ll be right back in the mix with some of the great boxers in the Lightweight division in Britain.”

Rees’ mouth-watering clash with Buckland is part of a great line-up of action in Matchroom Sport’s first boxing show of 2014.