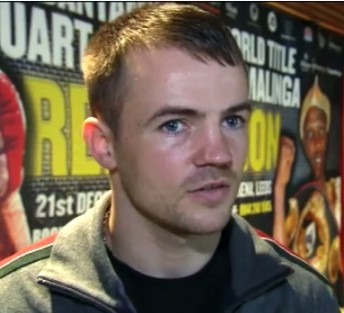 British and Commonwealth Welterweight Champion Frankie Gavin has signed a new promotional deal with Frank Warren that will see him fight for a world title this year.

The Birmingham star, 28, still Britain’s only ever World Amateur Champion, continues his stellar professional career under the promoter who signed him in 2009.

Under Warren, Gavin has amassed a perfect record of 18 wins from 18 fights and 12 KO’s, winning the Irish and WBO Intercontinental titles at light-welterweight before moving up to welter to capture the British and Commonwealth belts.

Last year was the best of his career that saw him beat big undefeated rival Denton Vassell and snatch his Commonwealth title before going on to beat David Barnes in his next fight and win outright the Lonsdale belt with the third title defence.

The hard-hitting southpaw is rated at number three in the WBO with Namibia’s Bethel Ushona at two, Filipino star Manny Pacquiao is at number one with American Timothy Bradley as the champion.  Warren and Gavin will look to get an eliminator against Ushona and get into the mandatory position to face Bradley.

It’s a big year for Gavin and he’s delighted to start it by penning a new deal with Warren.

“I’m extremely happy to re-sign with Frank and continue being promoted by him with my fights being televised on BoxNation,” Said Gavin.

“He’s the best promoter out there in my eyes and has promoted my career brilliantly from day one.  I look forward to keep producing the results in the ring, remain unbeaten and bring back a world title,”

“You only have to look at what he did for stars like Naseem Hamed and Ricky Hatton in their careers just to name a few, he makes the opportunities happen for the fighters and I know that he’ll get the world title opportunity for me and it looks like it will happen this year,”

“I’m on the world scene now and I’m looking at an eliminator for the WBO title against Ushona before a world title by the end of the year.  I’m confident in my abilities, obviously Pacquiao and Bradley are the top guys in the division, but if I want to prove I’m the best these are the fighters I’m now in the mix with.”

Gavin’s trainer Tom Chaney, who has been tremendous in Gavin’s career, is also thrilled that Gavin has put pen to paper with Warren.

He said, “I’m really glad that the deal is done and that Frankie continues his career with Frank Warren.  For myself, looking at how Frank has handled his career, it’s been perfect.  He’s the best promoter in Britain for a reason – he knows how to build a professional fighter from the amateurs and turn them into a world champion and he’s done it continuously for over 30 years.  Frankie’s career is in safe hands and I’ve got my job to do day-in-day-out in the gym to make sure Frankie trains and fights to the best of his ability and we’ll win a world title.”