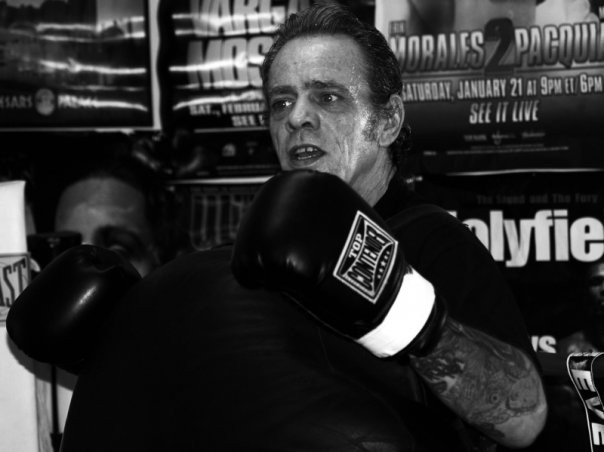 Salford’s Billy Graham guided Manchester’s Ricky Hatton to the light-welterweight world title and helped “The Hitman” nab the WBA title up at welterweight, he also brought a host of British fighters to a heap of titles and walked away from the game with few professional regrets.  Graham, though, loves delving into the history of the sport and has spoken ruefully talked about the fact that he never got to bring a bantamweight boxer to a world title or guide a top-level heavyweight to sport’s ultimate prize.

Graham is huge fan of Ali, Liston, Louis, Holmes and pretty much every heavyweight champion from the division’s rich history.  He also has a soft spot for entertainers and has been keeping a keen eye on the rise of Tyson Fury.

Fury meets America’s Joey Abbell, 29-7 (28), on a Frank Warren-promoted bill at London’s Copper Box venue tonight — his first action since an off the floor seventh-round KO over Steve Cunningham at Madison Square Garden Theater last April.  Plans are already in place for a summer rematch with London’s Dereck Chisora, who he decisioned in 2011 to become British and Commonwealth champion.

The retired trainer is looking forward to Fury’s return to these shores; he believes that the 6’ 9’’ contender brings a sprinkle of stardust and controversy to the British scene.  “I like Tyson, he’s really good for the boxing business,” said Graham when speaking to BoxingScene about the unbeaten (21-0 with 15 early) fighter.

“I sometimes don’t like some of the things he says, but that’s boxing — it’s show business.  Tyson’s actually quite versatile in the ring as well, especially for a heavyweight — I’ve seen him switch styles and can see who he’s imitating when he adopts those styles.

“You never know what he’s going to do, he’s an unpredictable guy, but that’s also why he’s showbiz.  Tyson’s also very big — and size does matter in this game — yet he knows how to use his physical gifts as well.  I’m not one of those who is in the game of knocking Tyson Fury, he’s a very talented boxer — if he’d have met David Haye it would have been a case of whoever lands first.”

Fury went through a few trainers earlier in his career.  Peter Fury, Tyson’s uncle, took over the reins in 2012 and has brought an edge to his nephew’s game, not to mention a strict conditioning regime.  Like Graham before him, Peter is a strong presence in the corner on fight night.  His Visa problems prevented him from entering the U.S.A. for the Cunningham fight; Graham believes that his calming influence was sorely missed.

“Tyson’s got his uncle in his corner, he changed trainers quite a few times and I think he’s more settled now under Peter,” he said.  “Peter works well with Tyson.  In fact, I think this was shown in New York when Peter wasn’t there.  I’m not saying 100% that Peter could have calmed things down, no one knows for sure.  I just think that if Peter was there, he would have settled Tyson when he got him to the corner.  This is going from what I’ve seen of them on TV.

“Peter might have a hard time at times.  Not because of himself, he’s doing great, but because he has to make sure that Tyson’s always on his game plan — that’s the responsibility you take on as a trainer.”

“Tyson’s a young fighter, Peter’s relatively new to professional training, so people might think it will get hard for them when the big money comes in, but people don’t understand that it’s the wins, not the money, that drives you.  No matter how much money he makes, Tyson will always have his eye on the world title.  Then he’ll have his eye on the undisputed title.  There will always be something to work towards.”

Fury boxed to a Peter’s plan against Vinny Maddalone (TKO 5) and Kevin Johnson (W12), he closed the show emphatically against Cunningham.  Fury brings more than just sound boxing ability; he also has an eye for devilment and the KO.

“I don’t want to sound cruel, but hurting’s the name of the game and Tyson promises to do that in his fights — he never makes for a boring fight,” said Graham.  “I often don’t know what he’ll do, and sometimes wonder if he knows what he’ll do, so Peter’s corner work will always be crucial.

“You know, I’ve always loved the heavyweights.  Then some of them got too big and too slow.  That’s why I’ve always liked little, speedy guys like David Haye, but Tyson’s a big guy who has got potential because he’s Klitschko-sized yet he’s not slow like some of these other big guys.”

Fury likes to delve deep into the history of the sport.  Pat Barrett worked with him briefly here in Manchester, when Fury hooked up with Brian Hughes MBE.  “The Black Flash” often waxed lyrical about Fury’s knowledge of the heavyweight division, both past and present — Fury being Fury, he always pointed at himself when asked about the future of heavyweight boxing during our interviews at Hughes’s Collyhurst-based gym.

“I didn’t know that about him, and I respect him more for it,” said Graham.  “Wow.  I don’t know Tyson personally, but that is very nice to know because I always encouraged my fighters to watch fights and study.  It’s not just heavyweights, a lot of fighters don’t study old fights — they’re not that interested.

“I love fighters who not only study but also talk boxing.  I’ve known a couple.  There’s Ricky, obviously, Matthew Macklin was another one — you can sit down and talk boxing with them all day long.  I like fighters who watch tapes, study tapes and then come to the gym to discuss what they’ve seen.  I’d take them over someone who doesn’t want to do that.  Although I think a lot of fighters say they don’t watch boxing when they really do.

“That type of thing shows desire and ambition.  I’m also glad that he’s managing his weight a lot better.  Tyson’s tried to change his body a little a bit, he’s not carrying as much fat and is paying attention to his nutrition under his uncle, which is a really good thing.”

Graham is firmly ensconced in his retirement, although he enjoys firing out the odd note from his self-imposed exile when the mood takes him.  He is in a good place; his passion for pugilism is undimmed, his boxing brain is still sprightly and limber when it comes to the mechanics of the sport.

Indeed, and despite being a long-standing Luddite, “The Preacher” entered the digital world by picking up an iPad before Christmas.  He immediately set about getting someone else to download a swathe of fights.  His TV fix is being well and truly satiated as well.  He is just like you, Graham will put his feet up at the end of this week, bring someone in to set the Sky+ box to record for repeat viewings and sacrifice yet another Saturday night to the game he still loves, but admires from a distance.

“I’m talking to you here as a boxing fan now, and as a fan I like Tyson,” he said before signing off on an optimistic note.  “Historically, the division always has someone pop up at the right time to capture the public imagination.  Tyson’s got the public onboard, he’s a young kid and we should all get behind him.  He’s got desire.  When you hear he’s fighting you make sure you turn on the TV and watch him.”

Fury versus Abell is live on BoxNation and BoxNation HD (Sky Channel 437 or 449) from 7pm on Saturday night.

Courtesy of BoxingScene.com and Rick Reeno.