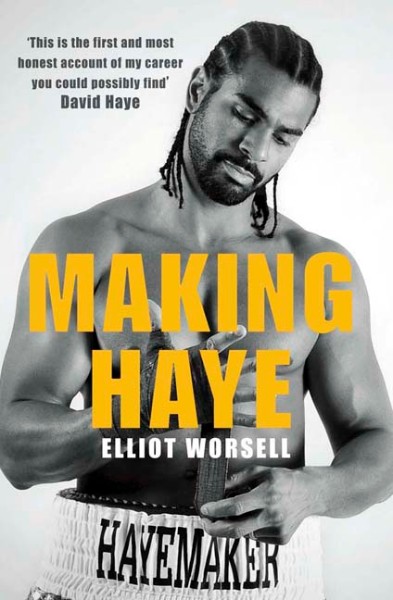 Here is a great video for all the ‘Hayemaker’ fans out there! Former two weight world champion David ‘Hayemaker’ Haye became the undisputed world cruiserweight champion before moving up to Heavyweight to claim the WBA version of the crown…

Once a world amateur silver medallist at heavyweight, Haye began his professional career in December 2002 as a lean and mean 190lb cruiserweight. Blessed with a knack of ending fights in brutal fashion and an innate desire to take risks, he quickly gained a reputation as a firm fan’s favourite.

In his tenth pro bout he tackled former IBF champion ‘King’ Arthur Williams, while ex-WBO kingpin Carl Thompson followed in his eleventh outing, and then a shot at hard-hitting European titleholder Alexander Gurov arrived in bout number sixteen. Ups and downs were an inevitable side effect of this policy, but by the close of 2005 it had taken Haye just 45-seconds to rip away Gurov’s prestigious EBU title and gatecrash the world rankings.

Then, having won and defended the European cruiserweight title three times, the last of which was a WBC world title eliminator against Giacobbe Fragomeni, Haye risked his reputation and the very real possibility of defeat against WBC and WBA world cruiserweight champion Jean-Marc Mormeck in November 2007. While lesser men may have shirked such a challenge, Haye relished the idea of venturing to Paris, France to confront the most feared cruiserweight on planet. To him, it was simply part of the job.

A job well done, too. Because it took Haye less than seven rounds to disconnect Mormeck from his senses and title belts. In addition to seizing the Frenchman’s WBC and WBA belts, the hard-hitting Briton was also crowned The Ring magazine champion, an accolade that well and truly announced his arrival as undisputed numero uno at 200lbs.

Of course, while Haye claimed his reign at the top of the division would be short-lived, on account of weight-making issues, he’d later bow to the nation’s pleas and accept one final showdown at cruiserweight; a date with long-time domestic rival and WBO titleholder Enzo Maccarinelli.

Billed as the biggest all-British ring collision for fifteen years and a genuine 50/50 contest, Haye made a mockery of such assertions as he swept aside his Welsh challenger in just two frighteningly swift and dominant rounds. Thus, Maccarinelli’s WBO strap was promptly transferred from his waist to the waist of the man from south London. Plethora of titles to his name, Haye became the first and only British boxer to unify the cruiserweight division.

Despite that landmark achievement, however, there was still no stoppin’ him. And just as Evander Holyfield stepped up to the heavyweight division and replicated his cruiserweight success among the big men, a buoyant Haye aspired to do the same. So, after causing a stir and calling out the heavyweight division’s key players, ‘The Hayemaker’ then looked to become the division’s most personable, charismatic, marketable and exhilarating addition since a young ‘Iron’ Mike Tyson.

Indeed, his November 2008 slugfest with Monte ‘Two Gunz’ Barrett signalled the start of the planned takeover, as Haye dropped the respected New Yorker five times in five rounds and thrilled the O2 Arena crowd with a stunning fifth-round stoppage victory. As far as coming out parties go, it was as productive as anyone could have hoped. The performance worked on two fronts; it excited his public and petrified his rivals.

The following year, after seeing potential fights with the Klitschko brothers (Wladimir and Vitali) fall through, Haye suddenly found himself in line to challenge for the WBA world heavyweight championship. The champion at the time, Russian Nikolai Valuev, stood seven-foot tall and weighed 23-stone, yet, even in the face of Goliath, there was no stopping David. While some feared for his health, the comparatively minute Englishman travelled to Nuremberg, Germany in November 2009 and toppled the giant over the twelve round distance. In doing so, he became not only a two-weight world champion, but the first Briton ever to win world titles on foreign soil at different weights. He was also an overnight sensation.

Belt in the bag, now all he had to do was keep it. For starters he successfully defended the WBA title twice in 2010, stopping both John Ruiz and Audley Harrison, and then went a step further and looked to unify the division with a blockbuster clash against Wladimir Klitschko in 2011. The WBA, IBF, WBO and IBO titles were on the line that July night in Hamburg, but, ultimately, the task proved a step too far for Haye. Despite his best efforts, the younger of the two Klitschko brothers walked away with the spoils after twelve absorbing rounds.

Nevertheless, Haye licked his wounds, returned to action in July 2012 and appeared as good as ever in his destruction of fellow Londoner Dereck Chisora at Upton Park. Buoyed by a vociferous crowd of 35,000 people, he dropped his opponent twice in the fifth round, and finished proceedings with one of the most eye-catching knockouts of the year. More than that, though, the clash provided a stark reminder of exactly why ‘The Hayemaker’ remains the most explosive and thrilling heavyweight on the planet.

Want more? why not buy your signed copy of the David Haye autobiography – To find out more about the Hayemaker visit. WWW.HAYEMAKER.COM