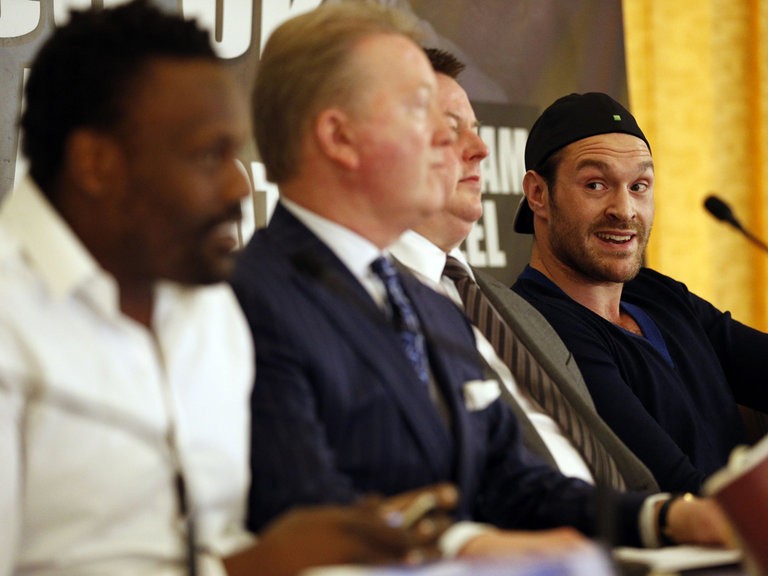 Chisora and Fury – Bringing It All Back

Yesterday I watched the rebirth of British Heavyweight boxing. It’s true man, I’m a believer from here on in. The Chisora/Fury presser filled me with pride and got me thinking – have we ever really had it so good in the land of the British big boys? Not in my opinion we haven’t…

Yesterdays press conference was a refreshing insight into what boxing could be if fighters were allowed by money-fixated promoters to be the people they really are behind closed doors and when the cameras have all gone home. Forget the robotic hyperbole of pre-planned answers just to enhance their appeal for selling aftershave, and get lost too the fake argy bargy that makes me want to put my foot through the television. What we deserve as fight fans are two things: a good fight, and not to be treated as fools.

In yesterdays presser we had the new Dereck Chisora, different from the imbecile who spat at Klitschko and scuffled like a common drunk with David Haye. That Chisora I didn’t like one bit. The new Dereck is different, somehow more erudite, funnier, and more in control. He took his time, dispensed with the fake threats about guns and actually engaged with the alcohol soaked hacks like a man who was confident in his own future. With the ever impressive Don Charles by his side, I bought everything they both said without a hint of irony.

Being in a press conference with Tyson Fury must be how it feels to be locked in a cage with a large, hungry, Hyena. Tyson is relentless. It doesn’t matter if you get the slightly unhappy Tyson, or the full-of-life Tyson, he’s going to make your day a tough one. I doubt Muhammad Ali could really shut Tyson up in full flow. And that’s what we got. He polarises people – bit like marmite, or real ale – but I can tell you when he’s on his own Tyson is exactly the same. He’s actually a very likable guy. I guess that some of his detractors don’t factor in that all he’s doing is being himself and refusing to play the corporate game, unlike some other UK Heavyweights I could name. If he doesn’t like you, you’ll know about it, but if he does he’s much fun. What you don’t get from him is a two faced liar, and that’s to be applauded in this sport. Want to know what motivates a fighter? Ask Tyson – “It’s about money; providing for my family”.

But to the fight…

Dereck has most certainly improved his boxing abilities since he lost on points to Fury three years ago. Since then, he’s fought Robert Helenius, Vitali Klitschko, Edmund Gerber, David Haye, Ondrij Pala, Hector Avila, Kevin Johnson, and a journeyman that I can’t even bring myself to mention. Dereck didn’t win all those fights, and some of the ones he did win, he won looking average. The truth is that Dereck Chisora has been in with some very good fighters in those three years no matter what your opinion of him is.

Finally, and the most telling improvement for Del, is the fact he is finally taking training seriously. He’s not that tubby inside glove slapper with a decent chin anymore. Instead, we have a fighter who trains and eats right. He still has issues in long fights with his fitness – see the Johnson fight – but you can’t discount his work ethic any more. Chisora has stopped taking breathers in rounds and then trying to slap his way to victory like a stranded cod. He’s not a huge puncher but he’s game for a scrap. In short, Del Boy is value for money for his European title.

Tyson Fury has had a terrible year. All his good work against Kevin Johnson (who said after the fight that Fury hit him harder than any man had up to that point) and Steve Cunningham was undone by the weird coincidences surrounding David Haye’s injuries. And anyone who feels that Steve Cunningham was easy meat let me ask you this – would you back Anthony Joshua against him, or David Price, with more than the contents of your wallet? Me neither.

Instead, Tyson had a brief retirement and then re-entered training in January of this year very overweight. The fact he managed to shift two stones in four weeks is nothing short of a miracle. But I’ve seen how the Fury’s train and they’d get butterbean in shape – if he wanted it or not. For the Chisora fight, Tyson will be a totally different man – again. His trainer (and Uncle) – Peter Fury – is nobodies fool. After the Cunningham fight, in the dressing rooms, Steve kept saying “Man, I just didn’t realise how long he was” about Tyson’s range. But what did it for Steve, Rogan. Abell, and Vinny Maddalone wasn’t reach so much as inside work. For such a big human being Tyson works well inside and up close and personal. And Dereck likes that too.

One thing is for certain, nobody will run, nobody will make excuses, and both men will give it their best. As the PR blurb says – this is the key to the door. The WBC route is now concreted off for Deontay Wilder. But the WBO seem to be having a sober moment, and we all need to thank them loudly. Either Chisora or Fury will fight Wladimir Klitschko before the year is out. Of that I’m certain. The bookies have Fury as the nailed on favourite and that’s how I see it. Dereck is a deserving and genuine opponent at world level for anybody, but I think Tyson is just too big, too tough, and too fast (genuinely) for him. It will be a king hell of a fight no matter who you support, and that’s what we all want.

But Fury and Chisora aren’t the only two British kids in the playground. David Price is still on the comeback trail – though is chin is yet to be tested again – Anthony Joshua continues his meteoric rise at the knee of Eddie Hearn, Hughie Fury isn’t yet an adult fighter and yet he has a record of 13-0, and David Haye, like a pantomime villain, will make a re-entry to the sport, unless I’m very, very, much mistaken. And (barring Haye) none of these men are over 30. The future is very bright indeed.