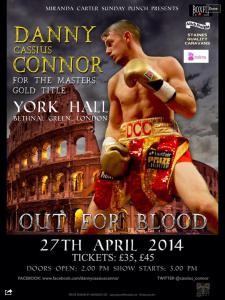 Connor stated on Facebook earlier, “First proper spar back today with my old foe and friend Tornado Tyler Goodjohn who’s looking good to go for his English title shot, gonna be one hell of a good fight, nice to be feeling the heat of sparring again!”

Former Southern Area light welterweight champion, 28 year old Connor (10-8-1) will fight for the vacant British Masters International Gold title against an, as yet, unnamed opponent on Sunday 27th April. The opponent will most likely be coming from overseas.

This will be the Surrey boxer’s first fight of the year, and the former British Masters and Southern Area champ is excited at the prospect of starting the year with a title shot, “Can’t wait! This is my time, I’m coming back with a bang! And I guarantee I’ll be a champion again this year.”

Conner commented, “The whole camp has been hard, me and Alec have been working on new stuff and things that needed improving, been doing loads of quality rounds with top fighters like Tyler Goodjohn and Francis Maina who both own Masters titles and come April, people are gonna see a slick, focused killer in that ring.”