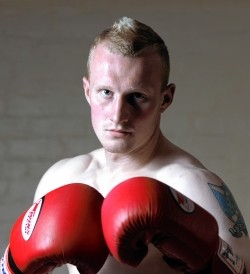 Tommy Gilmour ‘Steering Gary Cornish to the British title would be the final piece to my jigsaw.’

The fight features on the undercard of a triple title bill – headlined by Stuart Hall’s opening defence of his IBF World Bantamweight title against local rival Martin Ward and also featuring ex world amateur champion Frankie Gavin defending his Commonwealth welter strap against Namibia’s Sacky ‘The Snake’ Shikukuta and the British cruiserweight showdown between Birtley’s Jon Lewis Dickinson and Rotherham’s Neil Dawson –  which can be seen live and exclusive in the UK on BoxNation, the Channel of Champions from 7pm on Sky Ch 437 (HD490)/Virgin Ch.546.  Join at www.boxnation.com

The 6ft 7in joiner is yet to taste defeat in 26 fights, amateur and pro, and has manager Tommy Gilmour MBE salivating at the prospect of finally producing a British heavyweight challenger.

Glaswegian Gilmour, now 60, has held pro licences for over 42 years and yesterday spoke candidly to boxing writer Glynn Evans about his quest for the Holy Grail.

There’s plenty of big Scotsmen playing rugby yet, despite great success in the lighter weight categories, Scotland has a very mediocre record in the heavyweight division. How do you explain this?

Those rugby guys generally tend to be heavy lumps rather than the 17stone, 6ft 6in athletes who succeed at the top levels in boxing. We’re not really a nation who produces too many guys of that stature. That’s why Gary Cornish is such a novelty.

The last Scot who came anywhere near getting to the British heavyweight title was a guy called Ken Shaw who my father managed. I believe he only weighed around 13 and a half stone and got knocked out in the first round by Freddie Mills in a final eliminator in 1949 before I was even born!

Back in the 60s, Chic Calderwood from Craigneuk was a British and Commonwealth light-heavyweight champion who also fought for the European and world titles and ‘Cowboy’ John McCormick from Maryhill won British, Empire and European titles at middleweight. But we’ve not had much else at the heavier weights. It’s just the way our nation has evolved. Even in the amateurs there’s barely three or four that enter at super-heavyweight in any year. They’re lucky to get a semi-final and a final.

Gary boxed amateur for several years yet only had nine bouts (all wins). He had to travel up and down Britain just to get sparring to gain some knowledge.

What has been your own prior involvement with heavyweights?

I’ve only ever had one; big Ian Millarvie from Hamilton. He wasn’t a bad fighter and was capable of winning the British title. He was unbeaten in seven as a pro, five by stoppage and he beat (future Commonwealth champion) Marty Rogan in the amateurs.

I paid to take him over to the Catskills to spar Monte Barrett, and to Poland to spar Albert Sosnowski. But Ian started to see bright lights and listened to the wrong people. Twice he pulled out of Prizefighter tournaments when he’d have had an excellent chance of winning. He certainly didn’t have the dedication that big Cornish has. Eventually I had to sack him and he never fought again.

What qualities do you see in Cornish that give you faith he might be the one to break the Scottish drought?

His fitness, athleticism and dedication. After each fight, he analyses his performances very honestly and critically. He then tries to get better, working diligently to eliminate his shortcomings. I also like the manner in which he’s winning, in control of every situation.

Gary’s already proven that he has plenty of heart. In heavyweight boxing, as everybody knows, anybody can knock anybody else over. Last March at The York Hall, a Portuguese lump (Humberto Evora) hit Cornish flush on the beard and Gary collapsed like a deck of cards. Several would have stayed down but he hauled himself up, bit hard on his gumshield and eventually clumped all the fight out of the other fella (Evora quit on his stool citing a hand injury after round four).

Gary has been a pro for three years now. He’s won 17 straight and has stopped each of his last five opponents. However, he’s still to go past seven rounds. How close is he to a meaningful fight for, say, a Celtic title?

Let’s not forget that Gary’s still only 26. In heavyweight terms he’s still a big baby. Amateur and pro, he’s been inside a ring less than 30 times. He’s nowhere near the finished article and there’s so much more to bring out. What he now needs is fine tuning; loads of quality sparring plus fights against good opposition against whom he can learn.

He’s already sparred the likes of Dereck Chisora, David Price and Audley Harrison plus we’ve taken him to the continent to work with some of the top European heavyweights. However, at the level he’s currently at, Gary still has to make his living as a joiner. There’s financial constraints to his development.

Here, understand he’s already boxed three scheduled eight rounders and even a 10 rounder but none of those fights went past round seven because Gary did his job and got rid of the opponent early.

We hope to get him something before the summer but there’s nobody for him to box for a Celtic title.  A match with someone like Michael Sprott or Tom Dallas might be viable but there’s a lot of names who just don’t want to fight him.

Perhaps we could go the InterContinental route but that gives you exemption to fight for world titles so you have to be wary. Ultimately, I’d love Gary to become the first Scot to challenge for the British heavyweight title but Tyson Fury and Dereck Chisora are contesting that in July and, at this stage, they’re a few steps above Gary. He’s not ready for them yet.

You’ve achieved great things in boxing but never with a heavyweight. How important is it for you to breach that void before you retire?

I think it’d be the final piece to my jigsaw. I’ve had untold British, Commonwealth and European champions. I’ve steered Pat Clinton, Paul Weir, Jav Khaliq and James Hare to world titles and I’ve been associated in one form or another with at least ten world champions. But a decent heavyweight has always been hard to come by.

I came through an era of good quality guys, world champions like Floyd Patterson, Jersey Joe Walcott and Ezzard Charles, and top domestic heavyweights like Joe Erskine and Henry Cooper so I’ve always had an interest even though I wasn’t intimately involved myself.