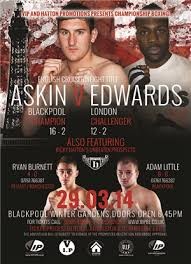 Edwards in hospital after losing English title fight against Askin

English cruiserweight champion Matty Askin successfully defended his title in his home town of Blackpool on Friday night with a 9th round stoppage but his opponent Menay Edwards who put up a great challenge at the Winter Gardens, collapsed after the fight and was taken to hospital with bleeding on the brain.

It was Askins’ first defence of the belt he won against China Clarke last year. A quick paced fight from the off, Askins started fast and hurt Edwards in the opening round, although it seems he broke his hand in the process. Edwards battled back hard and both gave it everything in an entertaining battle that ended in dramatic fashion with a big left hook from Askin but ultimately with sadness for the aftermath.

After the stoppage Edwards collapsed in his corner and after lengthy treatment by ringside doctors he was taken to Blackpool’s Victoria Hospital where he has been detained.

The boxer’s manager Steve Goodwin said on Monday morning that Edwards had had a ‘bad night’.

“Menay had bleeding to the brain and he fell unconscious twice.” Goodwin said:

“I saw him on Sunday and he seemed fine, but he had a bad night and he has been moved to a surgical assessment unit.

“If it is minor bleeding, it is not serious as it would be if it was a lot of bleeding.”

Edwards’ condition was described by Blackpool Victoria Hospital as ‘comfortable and stable.’