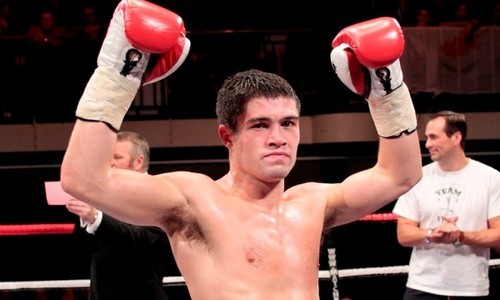 John Ryder says he will prove he has come back a better fighter from his agonising defeat against Billy Joe Saunders when he takes on Jez Wilson in a British Middleweight title eliminator this Saturday at the sold-out York Hall, Bethnal Green live on Sky Sports.

Ryder challenged Saunders for the British and Commonwealth titles in September and pushed the Hertfordshire man all the way, narrowly missing out on ripping the belts from Saunders’ possession in his first 12 round bout.

The talented Islington man, who bagged a valuable six-rounds in Liverpool a fortnight ago, admits that he had doubts about going the championship distance for the first time and says the lessons he learned that night mean he is ready to claim the Lonsdale this year.

“It was my first fight over eight rounds and I didn’t think that would be a disadvantage at the time, but in my head, mentally, yes maybe it was. I had been scheduled to box ten rounds twice but had stopped them in eight so now I have done the championship distance it will hold me in good stead in the future.

“I knew what I had to do to win and I didn’t do it. If you don’t do that, you aren’t going to get the win. You live and learn and next time I will.

“We have hourly diets in what we should be eating and what we should be drinking, and I didn’t have that stuff with me. Not that it is any excuse, but I know now I need to bring it to any venue as you never know what time you will be fighting.

“I have learnt bundles from that fight and it will stand me in good stead in the future, mainly from the rounds and what you have to do to win a title.

“I don’t know if the rematch will happen immediately with Billy Joe, but hopefully down the line it could happen for something bigger than a British title. I am focused fully on Jez Wilson in Saturday’s eliminator, and then we will go from there.”

Wilson travels to the capital from Sheffield ready for his first fight in over a year, and Ryder is weary of the 34 year old who he confesses is a bit of a mystery.

“I don’t know a lot about Jez Wilson – there isn’t much of him on YouTube but I have seen his record and who he has boxed,” said Ryder. “It is a good record and it speaks for itself. He has had 13 fights, 11 wins, one loss and one draw. He has been stopped once but you can’t read too much into that, the guy was a bit of a banger and I think he might have just got caught early on, caught a bit cold and maybe tried to have a bit of a tear up with him and come unstuck.”

Ryder’s clash with Wilson comes in between the semi-finals and final of the 33rd edition of the Prizefighter series, as eight Welterweights do battle for the trophy and £32,000 winner’s cheque.