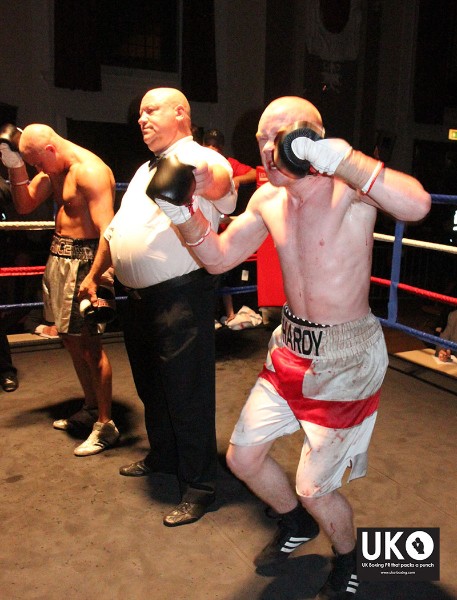 Steven Pearce has revealed he fought Ryan Hardy for the British Masters Welterweight Title with a chest infection on Saturday and wants a rematch to put the record straight.

It was an epic battle and both fighters were given a standing ovation by the raucous crowd in attendance. It was a bitter pill to swallow for Pearce who went into the contest on the back of an excellent stoppage victory over Rob Hunt for an International Masters strap.

Hardy deserves great credit for his performance and will to win on the road.

However, after the fight the 29 year-old revealed he was also battling against a chest infection and, having consulted a doctor, is currently on a course of antibiotics.

. “My throat was sore and from the fourth round, I was struggling to breath. It was a close fight, which I thought I won anyway, so I’d like the opportunity to fight Ryan again.

“He beat me on the night, that’s fair enough. I’m not after sympathy, I’m after a re-match.”

The current International Masters Welterweight Champion is willing to travel to his opponent’s backyard, as Hardy did last weekend, and is willing to put his own belt on the line in a ‘winner takes all’ rematch. However, with Hardy’s manager, Carl Greaves, indicating his charge’s future lies at light welterweight, a rematch looks unlikely.

“Carl and Ryan have both said they see him fighting at light welterweight in the future,” added Pearce. “I can’t make 10 stone anymore, so that’s not an option.

“I’d love the re-match up in Sheffield with both Masters belts on the line. Hopefully Ryan can be tempted but I’ll respect his decision to return to light welterweight if that’s what happens.