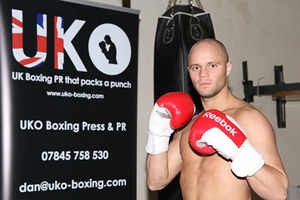 Pearce Wants To Be Master Of Masters

Steven Pearce – ‘I’ve been in with a few good kids and I think the improvements are there for all to see.’

Steven Pearce is ready to become the ‘Master of Masters’ by adding the British Masters Welterweight crown to the International Masters strap he picked up in his last outing.

The 28 year-old takes on Sheffield’s Ryan Hardy and is determined to add another belt to his boxing CV.

“I’m at that stage of my boxing career where I want to be fighting for titles,” Pearce told www.uko-boxing.com. “It gives me the motivation to keep training and working hard.

“I’ve held the Midlands Area crown and now I’ve got the International Masters title after beating Rob Hunt in my last fight. I want to add the British Masters title to my list and keep pushing forward.

“Hardy is a decent kid. I’ll treat him with respect but I’m feeling good and my camp is going very well.”

After his clash with Hardy, Pearce has set his sights on a second shot at Matchroom Boxing’s ‘Prizefighter’ Tournament. Pearce entered last year’s tournament, held at the Wolverhampton Civic, bowing out to eventual winner Glenn Foot. The Stourbridge scrapper would like to be considered for April’s tournament, which is screened live on Sky Sports, once he has lifted the British Masters belt.

“I’d like another crack at it,” he added. “It’s a great concept and I feel like I’m a better fighter this time around. Since Prizefighter, I’ve been in with a few good kids and I think the improvements are there for all to see.”

Pearce versus Hardy tops the bill of a bumper 11-fight card. Also in title action is Walsall’s Luke Paddock who takes on Stoke’s Kevin Hanks for a Bronze Masters belt.

Coventry’s Midlands Area Super Featherweight Champion, Troy James, is chief support on the undercard whilst Dudley light middleweight, Kyle Spencer, is back in action for the first time since May 2013.

Wolverhampton super featherweight, Des Bowater, will also be looking to maintain his unbeaten start to life in the paid ranks when he faces vastly experienced Latvian, Pavels Senkovs.