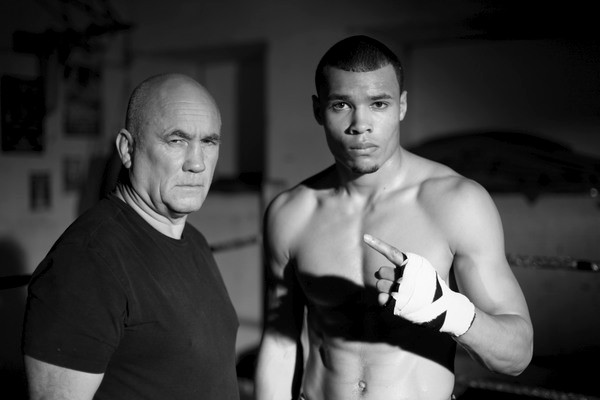 Coach Davies on Eubank Jnr: “The kid’s exceptional. He’s got everything!”

But now, at the ripe old age of 67, the former civil engineer who Eubank dubbed ‘my pit bull’ is back in the fray as head coach to the ex champ’s son, Christopher Jr.

And there is a growing swell of opinion that the richly talented 24 year old, unbeaten in 13, might be on the cusp of big things himself.

Tomorrow evening at The Copper Box in Hackney Wick, Eubank Jr looks to further advance his education in an eight rounder against two weight Hungarian champion Sandor Micsko, knowing a standout victory will place him on the brink of title contention.

On Wednesday evening, boxing writer Glynn Evans renewed his acquaintance with the veteran trainer to get the inside track on Eubank Jr and hear his take on the inevitable comparisons to his legendary father.

”I’ve literally known Christopher Jr all his life. I was outside the hospital room door the day he was born and used to take him to school and stuff when he was a nipper. He was a lovely, soft kid back then. I suppose I was like a second father to him.

He was born with a silver spoon and had a very privileged education. His father didn’t want him to box, certainly never forced it upon him. It’s all down to Christopher.

Christopher had been boxing at the Brighton and Hove City club when his father first brought him to me at 16. Immediately, I could tell he was an absolute natural; had a beautiful jab and this immense raw physical strength that all of Chris’s boys possess. He was an outstanding all round athlete; a gifted footballer and a really outstanding runner. From the age of 16, I had him sparring championship level pros like Tony Oakey and Henry Castle, and he was acquitting himself well against them.

In his late teens his father took him across to Vegas. Over there, Christopher benefited from some excellent sparring and he had a few amateur fights in the States. He also won a Nevada Golden Gloves title. Only two guys beat him and he reversed them both.

I guess he was about 18 when his father put him back to me and he’s never been out of the gym since; six days a week, a very dedicated boy. He listens, takes things in and lives the life of a fighter. He’s always on the weight and never touches alcohol.

We work mostly on hitting the heavy bag, plenty of roadwork and lots of sparring. For me, those are the things that develop a champion. I can’t take him on the pads because his father wrecked me hands but I’ve never been a great believer in the pads anyway. I’d chuck ‘em out the gym if I had my way. Pads don’t hit back and just make the trainer look good. Waste of time.

Personality wise, Christopher’s very different to his father was at the same age. Chris Snr was 21 and had already won five pro fights over in New Jersey when he came to me but he was always extrovert; a showman. By contrast, Christopher is very deep and hardly speaks. That’s alright. It makes my life nice and peaceful.

But like the old man he’s very strong minded. I was very surprised about how big his will was. Already he’s had to overcome a lot of things in his life.

And he’s clearly inherited many of his father’s fighting attributes; he’s got a tremendous heart and a fabulous chin. People say it’s unproven but I’ve seen it tested many, many times in the gym against some top, top fighters, several who’ve been far heavier than him. He’ll not be found wanting in that department, I can assure you.

He’s also got great reflexes and very fast hands. His father’s speed was underrated but when he was up against it and had to produce, Chris Snr always delivered. People questioned his level of opposition at times but the truth was, he was that talented he made good boys look ordinary.

And one thing Christopher has, which his father didn’t, is a high work rate. He’s at you non-stop, one of the most exciting fighters around. He’s loaded with natural power – he’s stopped his last five – and recently we’ve been working on him not setting his feet; delivering his big shots while he’s on the move. It’s a very difficult skill. Sometimes, he reminds me of Sugar Ray Robinson! I’ve given him a few (Robinson) tapes to study.

Chris Snr is at the gym most days and obviously has lots of advice to give. Chris and I still have loads of arguments, just as we did back when he was fighting. I was never a ‘Yes’ man. Junior never argues back.

Christopher is definitely at a comparable stage now to what his father was when he beat Anthony Logan (in Chris Snr’s twelfth pro fight) at a similar age. I believe Christopher could take several of the champions right now. He’d be too strong for (reigning British and Commonwealth champion) Billy Joe Saunders. He’d break him in half with his body punches.

But we’re in no hurry. Christopher only had 26 amateur fights and still needs to learn his trade; acquire the experience to deal with every situation that he’s going to encounter inside that ring. It’s not just about winning a title, it’s about being staying at the top for a very long time. Anyway, I’m not sure what direction his dad wants to take him. He might swerve the British and take the InterContinental route to a world title that he went himself.

Problem is, it’s become hard to get Christopher good sparring because he spars hard. He cracked Nathan Cleverly’s ribs and pretty much held his own with George Groves from day one. Perhaps we’ll need to go over to the States.

Though he’s introverted, he’s not shy about winding up his potential rivals on the social media sites. He’s very calculated. There’s method to everything he does and he enjoys stirring things up a bit. Can’t think where he gets that from?!

I’ve never believed in yelling out. I just advise little things and Christopher does listens to me. But he believes in himself massively and generally does his own thing. And I let him get on with it. He has completely his own mind inside the ring and that’s another real attribute. I’m a huge believer that fighters have to be able to work things out for themselves. No one else, not me or his father, can get inside that ring to help him.

Look, I know the game. In addition to his father, I’ve trained a lot of other quality fighters like Tony Oakey, Gilbert Eastman, Neil Linford and Henry Castle. But I work with Christopher Jr six days a week and, trust me, the kid’s exceptional. He’s got everything. So far the public have only seen half of it. There’s loads more in the bank.