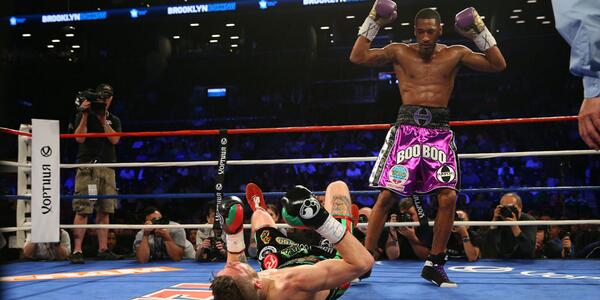 Brian Rose stopped in 7th round by Demetrius Andrade

Brian ‘The Lion’ Rose’s world title dream was ended after getting stopped by WBO light-middleweight champion Demetrius Andrade in the 7th round, at The Barclay Centre in Brooklyn, NewYork on Saturday night.

It was former British champion Rose’s first shot at a world title and although he was in confident mood going in, Andrade proved to be a few levels above anyone Rose (25-2-1, 7 KO’s) had faced before and he couldn’t find the moves to deal with the American’s movement, speed and power.

Andrade a former world amateur champion and unbeaten as a pro, (21-0, 14 KO’s) proved to be a worthy holder of the belt and certainly is worthy of the praise he has been receiving. Rose got off to the worse of starts getting dropped in the 1st round, he was up quick and wasn’t hurt by the punch but the signs were ominous.

Andrade was gaining in confidence after his good start and began to open up on Rose in the 2nd with hurtful shots that Rose just wasnt seeing such was Andrades speed and control of distance. His swift attacks were impressive and his straight left hand had already bloodied Rose’s nose and it could have been broke from then because it bled for the rest of the fight and looked in bad shape.

Things got worse for Rose in the 3rd when he again found himself on the canvas from a counter left hook from Andrade has he lunged in. Andrade did half help Rose over with a push while he was square on but he had been caught and took the count.

Bravely Rose plugged away, hands held high he tried his best to get some kind of foot hold in the fight but he could find nothing to put a dent in Andrade. Rose got through a tough 3rd round and in the 4th and 5th managed to stem the tide coming his way. Rose was trying to get his jab going and throw his right hand a few got through but Andrade was rarely anywhere near in range when Rose eventually let his leather go. It now felt now Rose was delaying the inevitable and Andrade seemed happy to have a couple of quieter rounds.

Andrade’s jab had fired into Rose’s face all night and ‘The Lion’ had eaten some real hurtful left hands from behind the southpaw champion’s jab. Uppercuts now started to jolt Rose’s head back and his coach Bobby Rimmer wasn’t going to let his lad take a beating and he was looking concerned after another good ending to the 5th round from Andrade. Rimmer was now taking a long hard look at his battered and bleeding student who was quite clearly up against a seriously talented champion and looking like he was on a hiding to nothing.

In the 6th round Rose again took more damaging blows, Andrade was looking for more uppercuts after having success with them and Rose looked more and more vulnerable and short on ideas and a plan B. The Rose corner gave their man another round and he came out for the 7th looking like a fighter who knew the end for him was near, one way or another. Still anything Rose tried was not coming off and Andrade again started to put the pressure on the Brit.

The combinations from Andrade had been impressive all night and again he opened up, he sensed Rose was hurt and went in for the finish, Rose tried to fight back but just as his coach Rimmer climbed the ring steps with towel in hand to save his boxer, referee Michael Griffin jumped in and stopped the fight to Rose’s mercy.

It has been a long hard road for Brian Rose to get to this point and to secure himself a dream world title fight but on the night he fell short to a champion who looks like he could be around for a while and will cause any light-middleweight in the world problems.

Will Rose carry on boxing after this? It is hard to see where he goes from here, he has done everything domestically and had already achieved what he set out to do when he turned pro, win a British title, a world title fight was the unexpected icing on the cake.

The journey through Brian Rose’s career has been a memorable one for many reasons, some highs and some lows and plenty of pain and sacrifice. Getting to this stage alone is a remarkable feat for Rose and his coach Rimmer and they will be honest enough to admit that Andrade was just a class act and a step too far for Brian.

“I earned my right to be here, but he was better than I thought he would be,” Rose said afterwards. “He may be one of the best out there in the game. I just couldn’t keep up with him and I couldn’t keep him off of me.”

The chances of Rose now stepping back down to domestic level are slim, he would have made a few bob from this fight and looks likely to call it a day, unless he decides to chase a European title shot, a belt he hasn’t won yet . If Rose does retire he can look back on his career and know, he always gave it his best and graced the sport with character and a determined admirable resolve.

Demetruis Andrade could turn out to be on this evidence, one of the best pound for pound boxers around and it’s never too bad a thing losing to one of them.

Unlucky Brian and Bobby and thank you for the ride.

Would you like to see Brian Rose continue with his career or retire?