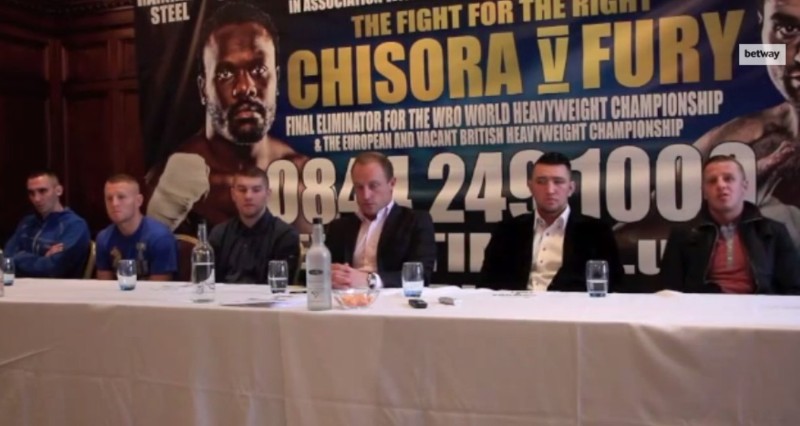 Today Francis Warren held a press conference in Manchester to reveal some of the boxers set to feature on the undercard of Tyson Fury vs Dereck Chisora at the Phones4 U Arena in Manchester on July 26.

Set to appear on the bill and featured on this video are Liam Smith, Hughie Fury, Terry Flanagan, Gary Sykes, Nathan Brough. Billy Joe Saunders will also feature on the bill and his interview and press conference can be found on iFLTV page here.

Derry Mathews will defend his British lightweight title against unbeaten Mancunian Flanagan. Plus Bolton based American Eddie Chambers, a recent signing of Team Fury’s also makes an appearance on the Manchester bill.

Another fight you might want to watch out for on the bill is Jack Catterall who takes on Nathan Brough in a battle of unbeaten light-welterweight’s for the central area title. This should be a cracking fight and the winner will have big nights ahead and a bright future. Catterall is a solid hurtful punching southpaw and a real handful who has shown glimpses of talent and maturity beyond his years in 8 fights, stopping 4. Brough is a slick boxing stylist from Liverpool and himself carries prospect potential and big hopes into this one with a 11-0, 2KO record. Could be fight of the night!

Meanwhile talkSPORT, radio have announced that they will broadcast live commentary of the upcoming showdown between Chisora and Fury.

The heavyweight dustup between British boxing’s two most controversial stars which will serve as a final eliminator for the chance to face Wladimir Klitschko for the World heavyweight title and continues a summer of marquee boxing events in the UK.

The Radio commentary will be available on 1089/1053AM, DAB and online at www.talksport.com

Or you can watch it on BoxNation, sign up here