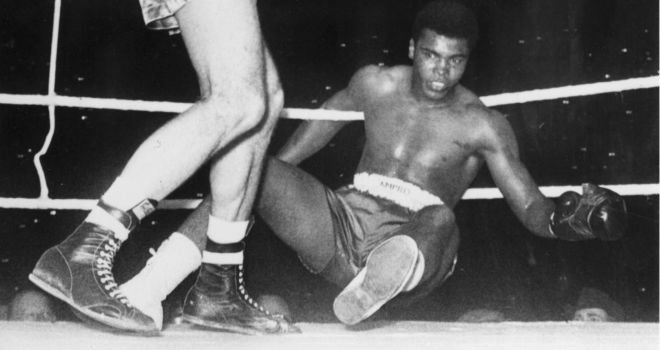 Britain’s gentleman pugilist Henry Cooper, later Sir Henry was already a national treasure when he took on the young brash American, former Olympic Gold medallist Cassius Clay aka Muhammad Ali the name he later became known as. Cooper was the best of British, domesticity he ruled and in the Commonwealth and took on the unbeaten Clay in front of 40,000 fans at the old arena in London. The fight remains one of the most memorable to be held on British soil. Ali went on to rule the boxing world after this fight, but it all could have been so different! – Cooper came close to re-writing the history books and if it wasn’t for controversy, ‘The Greatest’ may never have taken the path he did to the top and Cooper would have earned the world title fight against world champion of the day Sonny Liston. Either way the talent that was Muhammad Ali, he would have reigned eventually anyway, but which way? An interesting thought?

Enjoy the fight video above, and below is an original fight report from 1963.

Cassius Clay, the fighting prophet from Louisville, fulfilled his threat to stop Henry Cooper in the fifth round at Wembley Stadium last night.

Referee Tommy Little led the half-blinded Cooper to his corner after one minute 15 seconds of the fifth session. Blood was pumping from deep gashes above and below Cooper’s left eye. There was not one in the crowd of more than 40,000 who would have wanted him to continue.

Clay, perhaps the fastest heavyweight in the world, did not escape completely. At the end of the fourth a terrific left hook from Cooper dumped him on the seat of his scarlet pants for a count of four.

Clay was sitting there, back against the ropes, when the bell sounded.

He got to his feet and tottered to his corner. Frenzied work by his cornermen got him into shape for what proved to be the final round.

So Cooper, who had carried the fight to Clay so bravely, again suffered a night of disaster brought about by his long-standing eye weakness.

Cooper, who won the first two rounds and shared the third, was, I thought, ahead when Little ended his game effort to beat a man 19lb heavier and seven years younger.

Cooper began with tremendous fire, hooking the 6ft 2in Kentuckian with his left to the head and clearly taking the first round.

He took the second. But Clay, dancing about the ring, throwing sighs of protest at Little, seemed completely happy.

Carrying his hands down by his sides, Clay weaved about the ring. In this round his right cross, which followed two lightning lefts, opened the first cut just below the British and Empire heavyweight champion’s left eye. In a fantastic fourth round, Clay poured lefts and rights to Cooper’s reddening face.

Clay sensed the end was near and got a little too cocky. As he threw a left, Cooper smashed over a left hook which dumped the American on the floor.

But Clay recovered magnificently. With blood spurting out of Cooper’s wounds, referee Little called a halt, examined the eye briefly, and led a sadly disappointed Cooper to his corner.

Clay posed for pictures, held up his hand with five fingers outstretched to remind the crowd of his prediction that he would win in the fifth.

The crowd booed; Cooper left to a round of applause. Back in his dressing room, Clay talked of how near he had been to defeat several times.

In victory, Cass the Gas became a gracious young man. He had nothing but praise for Cooper’s gameness and the power of his punching.

Crestfallen Cooper said: ‘I couldn’t see from the eye. Everything was blurred and I have no complaints about it being stopped. But for the damage to my eye, I think I would have won. Clay developed quite a respect for me in those five rounds.’

In Clay’s dressing room, world champion Sonny Liston’s manager Jack Nilon told Clay that he would give him a shot at the title in September after Liston had beaten Floyd Patterson. Clay replied: ‘I’m ready for the fight if the money is right.’