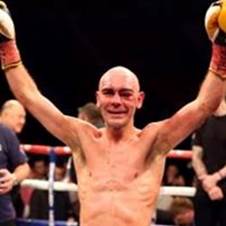 Man vs Boy: Stuart Hall says he is going to make Caballero pay

Older by 10 years and with three world title fights under his belt, former IBF bantamweight champion Stuart Hall is unequivocal about his clash with unbeaten American Randy Caballero (21-0, 13 KOs) for the vacant title in Monte Carlo next weekend.

The Briton (16-3-2, 7 KOs) can’t wait for the opportunity to be crowned a two-time champion, particularly after a dramatic year that saw him badly cut in his first defence – leading to a technical draw in the second round against Martin Ward – and then lose his belt in a fantastic tear-up with Paul Butler on points four months ago. Butler subsequently vacated the championship.

Hall has since been in camp for the first time in his career, saying that leaving home for eight weeks made his young daughter cry.

“I blame Caballero – and he’s going to pay.”

The former British and Commonwealth champion also teamed up with new trainer Paddy Lynch in an effort to gain the extra momentum required to regain the championship. He says the union hasn’t led to major changes, but a slight shift in movement and other minor tweaks designed to improve his game.

He respects what Caballero (24) has to offer, but says that he doesn’t see anything to really concern him. As for being a betting underdog, he laughs it off: “That’s been the case most of my career, it means nothing. When I fought Vusi Malinga for the title he was also the favourite. It’s fair play . . . more money for me to win.”

Despite his age (34), Hall only turned to professional boxing at 28 after quitting a wild five-year lifestyle of drink and drugs on the party island of Ibiza.

“I’m in my prime, I got all the badness out of my system back in the Ibiza days,” he says. “I don’t miss it. Boxing has made me live, made me a better person. I got up to loads of madness but boxing saved my life. If it wasn’t for boxing I’d either be in jail or I would be dead through madness. That’s what motivates me. It’s why I’m still hungry for success,” says the man who grew up idolising Muhammad Ali and more latterly Mike Tyson.

Hall has been matched tough throughout his career, having fought dangerous boxers like Martin Power, WBA bantamweight champion Jamie McDonnell and Malinga.

His style is the standard of many British fighters: he’s a gritty two-handed battler who does the basics well and boasts an excellent work rate.