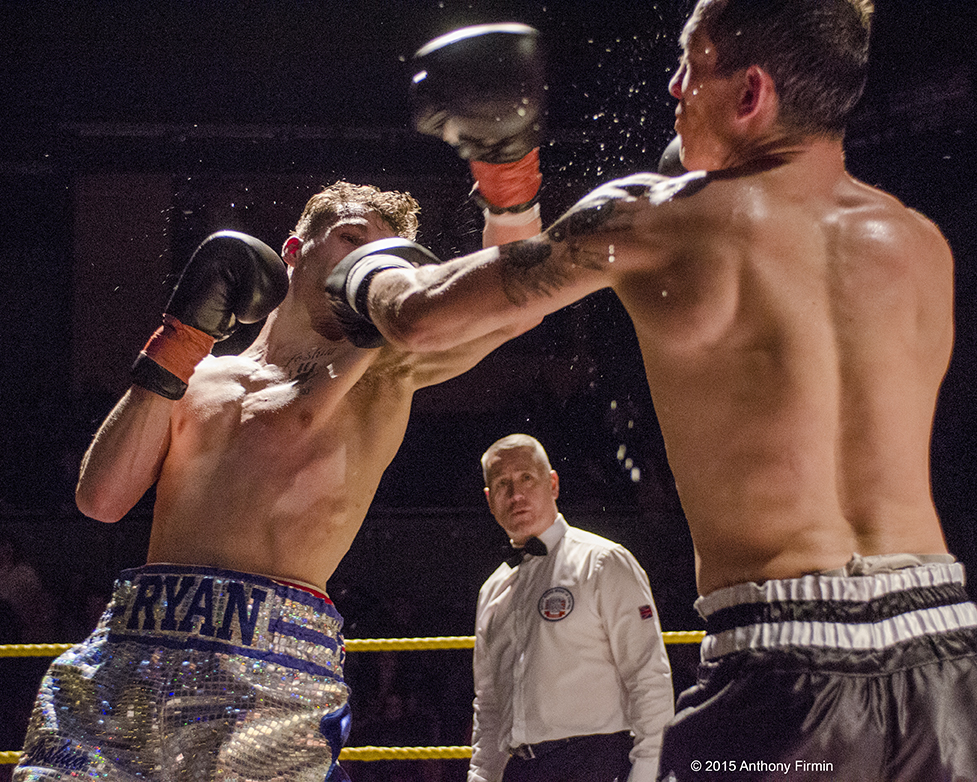 In the Main Event ‘Middleton’s’ Matthew Ryan was given a solid 6 rounds by the tough Kevin McCauley in Manchester on the Black Flash Promotion show ‘The New Year Explosion.

On Saturday night (Jan 31) in Manchester Black Flash Promotions in association with British Boxers presented the ‘New Year Explosion’ – A professional show featuring some of the bright spark Manchester boxing talent that is emerging from the Collyhurst and Moston boxing club, while also showcasing the talents of other local boxers.

This was the second promotion by the newly formed company and it was again a spectacle that entertained the fans and delivered great well matched, action packed fights, for everyone who attended and watched live at home Live and Exclusive on BBTV LIVE – the new boxing online platform by www.britishboxers.co.uk – Proudly Sponsored By: Whitemoss Pharacy – Andrew Cowie Construction – FitnessWater.co.uk

For the Collyhurst and Moston Club, which is headed by Pat Barrett and Thomas McDonagh, had boxers Matthew Ryan, Zelfa Barrett and Sean Ben Mulligan (debut) gracing the new Black Flash canvas at the sell out Middleton Arena. Other home boxers appearing on the bill The atmosphere was great inside the venue and the fans, all in good spirits did the boxers proud by bringing the house down and making the night a memorable event for all involved. The support helped the boxers rise to the occasion, every fight was an entertaining evenly matched bout and the fans got plenty of action to shout about!

Before the first fight of the night the show promoters presented another short display of explosive pad work with 4 x national female champion Laura ‘Cyclone’ Kelly working with her dad Scott on their impressive range of skills. Laura will be turning professional soon and Black Flash will hopefully featuring her debut on a future show.

Manchester’s Sean Ben Mulligan got his professional career underway when he outpointed the durable 114 pro fight veteran from Telford Matt Seawright over 6 x 2 minute rounds. With fantastic support in the arena on the night for Mulligan and then a assured display of boxing that seemed more seasoned than his 0-0 record going in suggested. This Big Ricky Hatton fan has a style not too dissimilar to the ‘Hitman’ he goes to the body with mean intent and has all the shots in the book and delivers them text book. We could have in Mulligan future star if his debut was anything to go by.

This was a light-middleweight contest between the unbeaten Mancunian Jimmy ‘Kilrain’ Kelly and Chatham’s Danny ‘The Real Deal’ Shannon. Both boxers were up for it and Shannon had not travelled up North from Kent to Manchester to lose and gave Jimmy a tricky start up until the devastating finish!

The fight was part of the ‘New Year Explosion’ by Black Flash Promotions and BritishBoxers.co.uk and shown Live and Exclusive on #BBTVLIVE

Fighting in his home town arena for the first time as a professional Manchester’s Liam ‘Dynamo’ Taylor produced a smart display of controlled boxing to tame the dangerous, entertaining, unorthodox southpaw Mick Mills from Gillingham.

Taylor is a neat, tight and very tidy boxer and with plenty of backing from an army of fans on the night he shown why he is highly tipped although the boxing fraternity as an whole are yet to recognise the potential, British Boxers knew this lad has something special.

Taylor dropped Mills with a crunching left hook to the body in the opening round and such was the power of it, it looked like Mills might stay down for the count! But he got himself up and battled on, until he was stopped in the 4th and final round after a barrage of accurate hurtful shots from Taylor. Taylor will now look to move on to a domestic title shot and has all the talent to go all the way.

This was Mick Mills’ second performance on a Black Flash/BritishBoxers show and he is coming something of a fans favourite. Manchester is boxing country and the fans respect their boxers. Mick Mills has become something of a Mancunian favourite, they recognise his bravery and love his antics, pre, during and after his fights and by the support he received in losing they want to see him again!

Exciting Manchester super-featherweight prospect Zelfa Barrett was made to work hard for his 3rd professional victory over another local man in Stockport’s Jamie Quinn. but was in truth always in control and took the referees decision.

Barrett and Quinn had history, they had met in the amateurs and although Barrett is now being built as a future champion, Quinn didn’t read the script and went looking for The Brown Flash’ from the first bell throwing big shots and constantly seeking his man. Quinn wasn’t effected in anyway by Barrett’s loud backing in the arena from the crowd and put on a good show. But Barrett slipped, parried and blocked most of Quinn’s shots and never looked troubled taking a close points win over 4 good rounds.

Middleton home boy Matthew Ryan produced a controlled display of boxing to outpoint old foe Kevin McCauley over 6 rounds in an entertaining all action rematch of their 2013 bout.

SIGN UP TO BBTV: Watch the Next shows and get update info on future events.

A selection of pics from the night – If you took your own pictures at the show and would like to add them to these galleries, please email them to us. info@britishboxers.co.uk