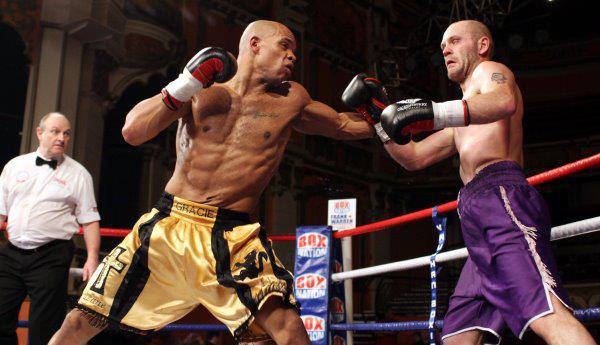 Merseyside cruiserweights, Wayne Adeniyi and Carl Dilks will clash for the vacant BBBofC Central Area title at the Olympia, Liverpool on December 6.

VIP Promotions’ Steve Wood has decided to switch the pre-Christmas show to Liverpool’s Olympia after originally planning on staging the bill in Blackpool and to make it a double-headline night.

Woods commented, “This is a genuinely good fight and it’s hard to pick a winner but both fighters have got to take the gamble.”

The two cruiserweights, both aged 31, are well-known and well-respected in their local area and a match-up of this calibre is one to tantalise each and every scouse boxing enthusiast.

Dilkes’ last fight went the full distance of eight rounds and has also been involved in three 10 round contests as well as a 12-rounder when he fought for the vacant Commonwealth super middleweight title in December 2009. Ghanaian, Charles Adamu just about got the better of him in a split decision vote at London’s York Hall.

Adeniyi cannot even come close to match the amount of experience that Dynamite Dilkes holds in the paid ranks with well over 100 rounds under his belt, Adeniyi can only boast 35.

However, Adeniyi does hail from a stellar amateur background and has won every round in his nine contests so far and carries an unusual aura of composure and self-assurance with him.

Adeniyi’s grounded lifestyle as a family man and his faith in God has much to do with his considered and confident manner both in and outside the ring.

‘The Rock Ferry Apostle’ stated, “I have real ambition and faith in my ability but my real passion is my family and my knowledge of God and trust in Jesus. Boxing as a professional is tough and running around selling tickets is difficult, but my family and faith helps me make sense of it all. I want to be a good example to people and my local community and send a positive message out there.”

The second part of the double-headline comes from the rescheduled English featherweight title fight between John Quigley and Ryan Doyle.

Originally due to take place on September 27th the tasty encounter was cancelled due to Liverpool’s Quigley suffering a cut in sparring.

Back on again, the Liverpool – Manchester rivalry will be reignited for the night much to the delight of local boxing fans.

Tickets are priced at £30 for standard and £60 for ringside and are available directly from the Team Adeniyi on 07894 016927. The fight will be streamed live on vipboxing.tv