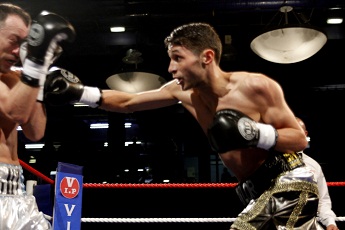 Unbeaten Liam Taylor goes again on October 18 when he will look to notch up his tenth straight victory – three early – at Manchester’s Victoria Warehouse.

With the card aired live on the Matchroom Fight Pass series, and Taylor coming off the back of his best win – a third round stoppage of Daza Usher – Promoter Steve Wood is expecting another blistering performance.

“Have a watch of this kid because I think you’ll be seeing a lot of him. If he comes through this fight unscathed then we’ll be looking to match him for titles.” said Wood.

“The light-welter division could be the busiest in Britain at the moment and there are some exciting fights out there.  I’ve watched a lot of light-welters in the last couple of weekends and, although I have a reputation for holding boxers back, I’m confident Liam is ready to get in the title mix and believe he’ll win a recognised belt in 2015.  In fact he would certainly be a fair match for new Commonwealth champ Dave Ryan right now.”

Taylor, 23, wants the big fights and is relieved his apprenticeship is now over.  With a tricky test against Ryan Hardy pending, Liam is aiming to show Fight Pass fans that he is the future of the division.

“The performance against Usher was by far the best of my career,” explained Taylor.  “He’d just been the distance with Mitch Buckland who’s highly-rated so I was expecting eight hard rounds but after the second I knew it wouldn’t go the distance.  I was too strong for him; he was scared.

“He was coming to win, and when they do that they leave gaps.  He was throwing shots, unlike a journeyman who tuck up and don’t commit.  In the first round he tried to knock me out but I hurt him a couple of times, and the rest is history.

“Hardy will be a decent test.  He’s got a winning record, has never been stopped and he took a round off Tom Stalker.  He’ll be big and strong because he campaigns at welterweight.  He comes forward and messes about, dropping his hands trying to draw you in.  If he does that I’ll stick the jab on him and he won’t last the distance with me.

“I want the English title next year.  The aim is to be in the top ten and then push on.  I’ll get this fight out of the way and I’m ready for any of them.  I’ve learnt my trade and got the rounds in.  If I got offered Curtis Woodhouse or anyone like that I’d take the fight and I know I’d win.”

The show will be aired live via Matchroom Fight Pass, and on delay via VIPBOXING.TV