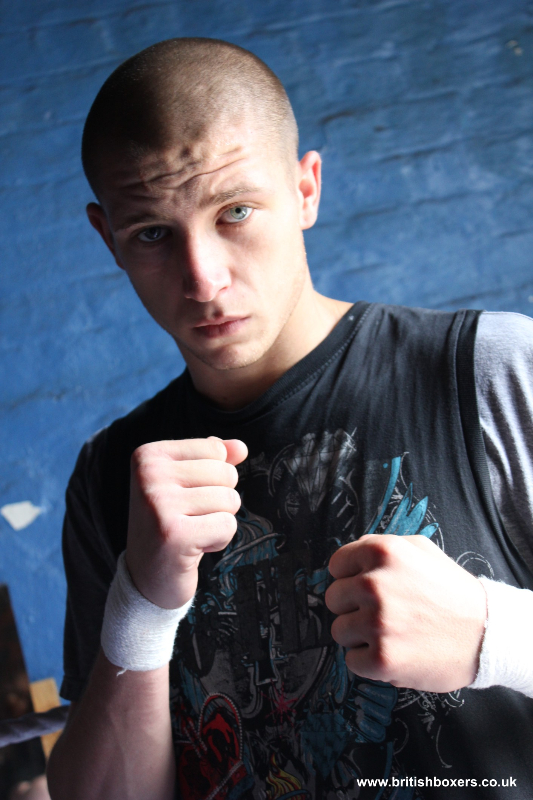 In shape and ready for fight night

At his heavyweight biggest 17st 3lbs

The Collyhurst and Moston new guard

Even Chris Monaghan’s Mum still call’s him fat boy, a name that at some point was bestowed upon him when he was a beer drinking, kebab eating 17 stone party boy, then more interested in getting wasted with his mates and then not doing much else, let alone even contemplating trading punches in a boxing ring. The name as ironically stuck and he now carries it into his ring career

As a youngster things were different, Fat Boy was a busy talented kid, playing football for his local Salford football team. He always held a fascination for boxing too and at that point you would have guessed he would end up in sport. But during his teen years Monaghan got in with a local gang of lads and began hanging around the streets. Drinking became his new focus and he stopped playing football and for the next three years piled on the pounds until he was almost unrecognisable. At his heaviest Monaghan came in at 17st, 3lbs, that’s 1 lb heavier than what Anthony Joshua weighed in his last fight against Michael Sprott.

One day something in Monaghan’s mind clicked and he woke up determined to change his life and lose weight. His mass of excess weight had become an embarrassment to him and he would go swimming wearing a t-shirt to cover the flab. He knew he had to change and he did. He joined a local boxing gym and set about changing his life. In the first three months he had lost 3 stone and today he weighs in at a trim fighting fit weight of 11st, in total losing over 6 stone.

After a good amateur career the Salfordian has now turned professional under his coach and promoter Pat Barrett and on January 31st at the Middleton Arena in Manchester, he makes his debut on an action packed bill by Black Flash Promotions. A far cry from the days he says he was dangerously obese.

“I was 18 I started boxing and I’ve been at it now for just over 6-years.” Monaghan told www.britishboxers.co.uk

“Before I started boxing I was your average Joe, I used to be out with friends every weekend drinking and being an idiot really.

“I was always active as a child playing football from the age of 8-years old for Swinton Boys Fc.

“I was always fascinated by boxing though and I was actually as going to start going to a gym when I was around 11-years old but my Mum like all mums, wasn’t keen on it due to the nature of the sport and it being related to violence and people getting hurt, so I didn’t pursue it.

“I continued to play football and stay as healthy as possible when I was young but then when I was around 15, I started to hanging around with a group of lads and began drinking every weekend. This had a very bad effect on my life as I stopped playing football and started to gain weight and it progressed badly.

“At 16, I started college attending Pendleton College studying sports coaching where I left with a double distinction merit and also graduated from university with a Foundation Degree in sports coaching. But during my classes always shied away from certain activities, for example I made excuses when swimming so that I could wear a T-shirt in the pool, I used to say I was allergic to chlorine so I did not have to take my top off in the water as I was so embarrassed of how I looked.

“This is what changed my whole life and mind set because at 18-years old, it was around August 2009, I woke up and had like a full change In mind set and it was like my body had been took over by somebody. I literally woke up looked in the mirror and decided today is the day I’m starting my local boxing club I need to do something about this weight gain that stood me at 108kg which is around 17 stone 3 pounds, things had to change!

This weight was killing me, I am only 5 foot 11 inches, I was over weight very unfit and had to make a change.” continued Monaghan.

“I started boxing just to loose weight but as the months went on I lost around 3-stone in like 3 months and was loving the training I was beginning to get the moves and the footwork and I learnt to skip. Before long boxing had become my life.

“One day my trainer at the time Steve Coletrup said I was getting kinda good and said, ‘you could fight ya know!’ Straight away my stomach turned with excitement and I thought did he actually just say that?

“I said you think so and things took off from there, by 2010 I had lost 5 stone and was put in for my medical and I became an amateur boxer. I had my first contest in November 2010 at the Irish Center in Cheetham Hill against Lyndon Arthur who is the nephew of my trainer/promoter Pat Barrett, I lost on points.

“I had a bad start to the amateurs trying to find the correct weight for me as my first fight was at 80kg this was way too heavy for me. I moved to Collyhurst where in 2012 I had 4 fights won 2 and lost 2 and loved every minute of it but due to the distance to the gym from my house I had to leave after being there only a year.

“After collyhurst I decide to join Irlam under coach Garry Booth which was a great thing to do at the time I lived in Irlam and everything went well while being at Irlam I boxed in two Senior Northwest finals 69-75 kg where I lost one and won one and became Senior Northwest Champion and boxing in the National Quarter Final where I lost on a shocking decision.

“As you can see, what Pat does for us down here is amazing and to see if for myself how good of a coach Pat is you don’t have to be in the gym just take a look at the talent he is producing, his other nephew Zelfa Barrett and also other prospects Matthew Ryan and Ben Mulligan, not to mention Lyndon Arthur who is currently in the England squad looking to get a shot at the Olympics in Rio. This is the kind of talent Pat is producing and I wanted to be part of it and I planned to go back and make my pro debut in May 2015.

“I came back to Collyhurst and within two days of being back I got a late night call off Pat, I thought oh no what have I done? I’ve only been back two days. Pat basically said why are you waiting to turn pro in May and not sooner in the year? I had no reason so he decided he would turn me pro straight away and that way I can be part of the shows the gym have in the early part of the year.

“So here I am booked in on my Professional debut at Middleton Arena on January 31st and I looking forward to it so much.

“I am currently preparing for it with the lads and everything is going great. I cannot wait to get in he ring now and do the business.

“I will be boxing at the lightest weight Ive ever boxed at but I am feeling great at dead on, 11 stone which is around 69kg, light-middleweight.

“I am living the dream becoming a professional boxer and I have a big bright future ahead of me and I am asking and learning every day in the gym with Pat and I will reach every goal I set myself and one day I will become a champion under Pat.”

You can watch Chris ‘Fat Boy’ Monaghan’s professional debut Live and Exclusive on BBTV brought to you by www.britishboxers.co.uk – Register Now and Watch for Free on January 31st. Follow the show at #BBTVLIVE

Also on this all Mancunian bill, will be other Pat Barrett trained lads, the unbeaten Mathew Ryan, Barrett’s nephew Zelfa ‘Brown Flash’ Barrett, Ben Mulligan also makes his professional debut. Plus recently added Manchester prospects Liam Taylor and Jimmy Kilrain Kelly, both unbeaten British Master’s Champions and will both take a bow on what promises to be another great night of ‘Black Flash’ boxing.