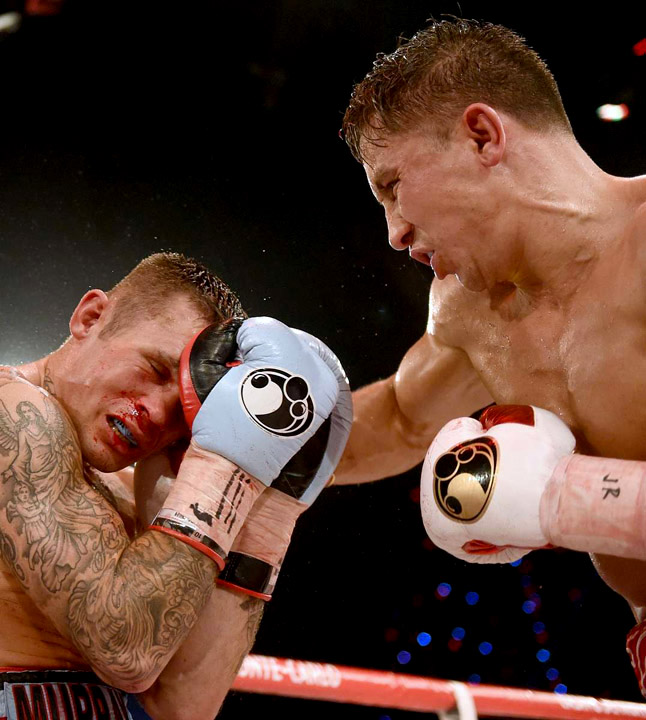 Golovkin stops Murray in the 11th round – photo-by-Naoki-Fukuda

Unfortunately it wasn’t third time lucky for Martin Murray in his quest to win a world title when he was stopped in the 11th-round by WBA middleweight champion, Gennady Golovkin, in Monte Carlo, France on Saturday night.

The St Helens boxer tried his best to combat the pressure tactics of the unbeaten Kazakhstan fighter, but the man they call GGG was just to strong, too clever and systematically took Murray apart before administering the finish, all done without changing the unfazed expression on his face, it will take a good man to dethrone this phenomenal boxer.

It was however a brave effort by Murray and he came out of the fight with plenty of credit and had no arguments, he like many others know how good Golovkin is now. The champion took control of the contest from the start and kept up his impressive record of winning all of his world title fights by stoppage.

Both started the fight tentatively while they looked to pick their punches and get the feel of each other at range, but it was evident early that it would be Golovkin on the front foot backing Murray up and cutting off the ring. After a cagey first round, the contest began to take shape as the champion caught Murray with a combination of punches finished off with a viscous uppercut to the jaw. Murray always responded with his own counter-shots but they were slipped and parried by the poker faced world champion.

Golovkin hurt Murray’s in the third round delivering an hurtful left-right barrage that shook the St Helens boxer but the bell rung to end the session before Golovkin could add to it and Murray seemed happy to hear the bell.

Golovkin knowing he hurt his opponent in the previous round Golovkin continued to press Murray and in the fourth he had the Englishman down after a left hook to Murray’s unguarded torso as he tried to slip out of range along the ropes. Golovkin landed right in Murray’s solar-plexus and with one minute left in the round was doubled over in pain. Murray rose on the count of eight and Golovkin systematically walked in the inflict more pain on the challenger. A big  uppercut that looked to have bust Murray’s nose again had him on the canvas but he bravely got to his fett and continued to try and find a solution to Golovkin and a way to win.

Murray regained his composure in the fifth after a dreadful fourth but Golovkin remained insistent in his attacks and by this point you felt Murray was there for the taking but with full credit given he continued to bite down on his mouth piece and battle back with Golovkin but the fight was slipping as the rounds wore on.

Golovkin continued to add more and more pressure and cut Murray’s escape routes the second half of the fight was hard for Murray but he never gave in and did his army of fans and them watching at home proud and you felt the best thing at this stage would be for Murray to be the forst opponent to push Golovkin the full 12-round distance.

The champion though just upped his ante again and 50 seconds into the 11th round, referee, Luis Pabon, stepped in to stop the fight as Golovkin unleashed a barrage of shots as he trapped Murray on the ropes. Murray ended the fight on his feet and he deserved to, it was a tough effort from him and we wouldn’t have expected anything different from this proud former British champion, but the GGG fellow is a bit special. Murray shouldn’t be too down he did himself proud and who says he cannot re-group and embark on a fourth world title challenge.