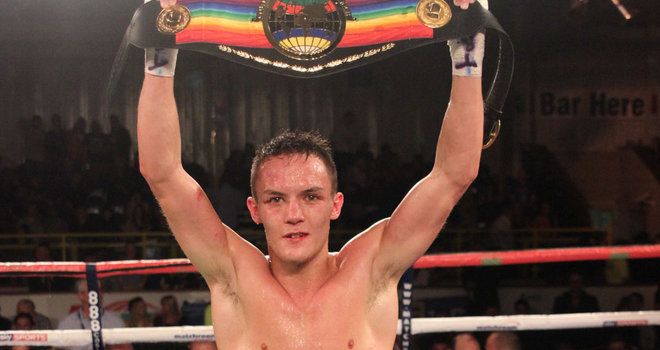 Warrington Decisions Tuberion – “We Are Leeds”

After some of the injury and sickness pull outs that have plagued this card over recent weeks and days, there was only ever going to be one guarantee going into Eddie Hearn’s return to Leeds, and that was the reception Josh Warrington was to receive from the energetic and partisan crowd that have earned themselves a reputation as some of the most loyal in all of British boxing. For this writer in actual fact, there is only one crowd to rival Leeds at the moment for atmosphere, and that crowd is found in Belfast N.I and they cheer a man called Frampton.

Despite that, the hometown faithful in Leeds did not disappoint, as aided by ex Leeds Utd footballer turned Hollywood actor Vinnie Jones, they cheered their fighters and made enough noise to ably carry their top boy over the finish line.

It had been noted that in the build up to tonight’s action much of the focus was on the legendary support the young Yorkshireman enjoys, as opposed to concentration on what truly matters; Josh Warrington’s talent in the ring.

Thankfully Warrington delivered tonight in that regard, shutting out a game and brave Dennis Tuberion over 12 demanding rounds in which there was rarely any doubt as to who was in control. The WBC International featherweight contest closed the Sky Sports televised card, that on this occasion, was a decent enough broadcast considering last weeks show from Newcastle and the minor catastrophes Matchroom Sport have had to overcome in delivering it.

The televised card began with former Prize Fighter winner Jono Carrol facing Carlos Perez over 6×3’s, and Dublin’s “King Kong” put some valuable rounds in the bag, earning himself the decision over a similarly experienced Spanish fighter who proved he didn’t just come to Leeds to make up the numbers.

Perhaps the most brave performance of the night came from previously undefeated and untested Liam Taylor, who stepped in to face the far more experienced Tyrone Nurse at extremely late notice over 12 three minute rounds that in the end, were NOT for the British light-welterweight strap.

The origins of this spot on the card began with the originally scheduled British title fight between Scottish veteran Willie Limond and Welsh prospect Chris Jenkins. When Limond was injured and unable to defend his title, he vacated, and Yorkshireman Nurse stepped up to answer the call of duty and replace Limond, thus attempting to stake his own claim on the vacant belt.

Sadly, just days ago, Chris Jenkins came down with food poisoning and was also forced to withdraw. The hole in the card was plugged by the game Taylor who put on a valiant performance against Nurse, though sadly, the British title was no longer up for grabs.

It was a brave performance that the late replacement can take much heart from. He was brave and energetic, although he was warned multiple times for butting. Whilst the seemingly busier fighter throughout, the more clinical and composed work came from Nurse, and Taylor was marked up and suffering with an eye swelling early on. In the 5th round a body shot from Nurse dropped the 24 year old Lancastrian, although no count was administered by referee Steve Gray, who appeared not to see the punch. Taylor rose to his feet, breathless, only to fall immediately, yet at the end of the fight it was reported Gray didn’t call it as the punch came after he supposedly said “break”.

The fight continued from there in much the same vein, with all in attendance commending the brave young replacement who simply couldn’t find the punch or power to really trouble the classier and visibly bigger Nurse. A unanimous decision in Nurse’s favour was the only realistic option for the judges and we didn’t witness a scandal.

Fans of Jenkins can however take solace in the fact that his illness will not prevent a future match with Nurse and that contest is a priority for Eddie Hearn to put together so that British title can eventually be claimed.

The penultimate fight on the Sky broadcast was a rematch of an earlier, close yet disputed contest between Martin J Ward and Maxi Hughes.  First time around it resulted in a majority draw. If anyone had any doubts over the Leeds born, Essex based Ward being able to do the business this time, they were quietly put to bed when his stylish boxing took the first round and much of the second.

Hughes and his awkward southpaw stance caused Ward some problems in both the 2nd and 3rd rounds, though after a dull fourth, the class of Ward began to tell and come the 5th round the nose of Hughes was starting to look a bloody mess. There was to be no round six. His corner pulled him out in the break.

And then, Warrington. The musical combination of “Marching On Together” (A Leeds Utd football anthem), and “I Predict A Riot” by local rock band Kaiser Chiefs certainly got the blood pumping, and a spicy opener got us wondering if we would see a rare Warrington stoppage, as we have on more than one occasion recently.

It wasn’t to be in the end, yet we did see an entertaining headliner that Eddie Hearn can take solace from. (Especially in the fact it wasn’t PPV!)

That joke aside, Warrington ended up showing his quality against an unknown “banana skin” who proved he had the durability at least to try and de-rail the train as it were. Filipino fighters are always going to be dangerous, and unknown quantities are always hard to deal with, but Warrington proved he is snapping at the heels of Britain’s best, Lee Selby by overcoming any moments of danger to earn himself the shut-out decision.

The only concern for this writer is the power, or lack of, with Warrington, but with such assured performances as this he is proving he is knocking on the door of world level and is ready to step up. He has moved one step closer to America’s newly crowned (WBC champ) Gary Russell Jr with this win, and should Lee Selby overcome Evengy Gradovich in May, a mouth watering all-British featherweight clash between them is surely on the radar for promoter Eddie Hearn, who has options over both fighters.

After the recent criticism of his company’s match-making, and the slaughter he has endured over his decision to put the May 30th card on PPV, Eddie Hearn can take some solace from this broadcast.

I enjoyed it, as I’m sure the many in attendance did. But the last PPV with Bellew and Cleverly has not been forgotten by those who shelled out to endure it. The upcoming late May PPV hasn’t quelled any of my quality fears after tonight, yet I will roll with the punches and worry about May 30th and London when it comes around.

For now, I’ll let Hearn off. It was an enjoyable enough night in Leeds. But lets not go kidding ourselves we saw anything of REAL world class quality here. It was what it was…….A night out in Leeds.