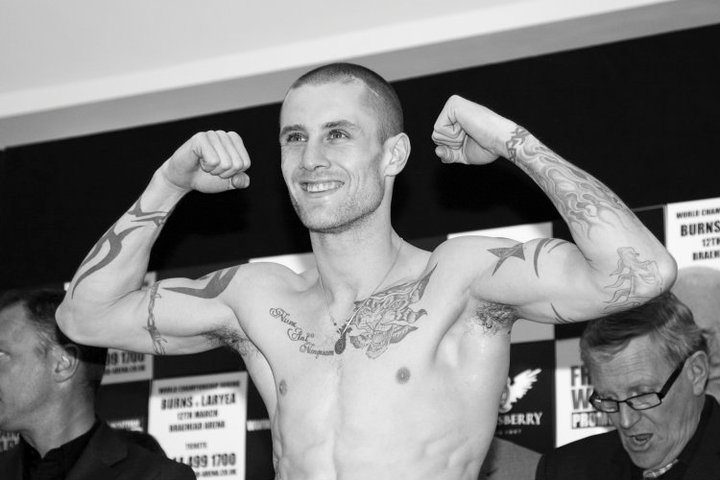 Ricky Burns says he wants to fight the best of British at Lightweight as he returned to winning ways against Prince Ofotsu at the KC Lightstream Stadium in Hull on Saturday night.

The Former Two Divisional World Champion quizzically won a fifth round stoppage of Prince Ofotsu when the corner of Ofotsu threw in the towel where he appeared to not be in any trouble.

The Scotsman believes that Britain’s 135lbs scene is red hot with Manchester’s Anthony Crolla coming close to being the second Word champion in the division from the city last month after his epic battle with WBA ruler Darleys Perez, following Terry Flanagan landing the WBO crown the weekend before against Jose Zepeda.

With gym pal and former foe Kevin Mitchell also just missing out on landing the WBC belt with an heroic performance against Jorge Linares in London, Burns believes he has put himself right back into pole position with his impressive performance in Texas in May against former World champion Omar Figueroa.

“There are so many big fights at Lightweight not only in the UK but on the world scene and I can’t wait to get involved in the thick of it,” said Burns.

“It was frustrating before to hear people say that I was being sent out to America to just be an opponent for Figueroa, I proved them wrong. I will fight anybody, that’s the only way you get the big fights. We aren’t looking at a particular route or governing body – whatever comes our way, we will be ready.

“I was gutted for Anthony in Manchester. He should have been given the nod but it was a close fight. With Darleys Perez getting the two point deduction – I can’t get my head round how they gave it a draw. Fingers crossed he gets the rematch as Anthony definitely has the beating of Perez and should be World champion now.

“Kevin was gutted after the Linares fight was stopped, he was ahead by a couple of rounds but that cut was pretty nasty, the swelling was bad and he did take a lot of clean shots. Kevin will be back soon enough in camp and we can get back to our wars in sparring – as usual and he will be ready to go again.

“Kevin and I wanted Anthony to win – we joked that we would have a spar and the winner would get to face him in his first defence.”

Burns came out on the wrong side of a points loss to Figueroa despite a tremendous display, and the margin of defeat would’ve been slender but for two points harshly deducted in the latter rounds for holding.

The 32 year old gained plenty of admirers for his performance despite the loss, and Burns hopes to cross the Atlantic again in the future.

“We knew it was going to be a tough fight, but I didn’t agree with the deductions for holding,” said Burns. “I thought he was holding as much as me and that’s why I had to tie him up.

“We moved up in weight for this one but still had some trouble making weight, but I didn’t want to jeopardize my chance to fight in America.

“I think it was his size that gave me problems more than anything. I don’t know what weight he was in that ring, but it was a lot bigger than me.

“The plan was to try to stick to boxing for the first half of the fight, but once the size really took over I had to stand and exchange more than I would have liked. I couldn’t get him off of me. I’ve got no excuses, as I said the best man will win.

“We’ve enjoyed the experience of being in the US obviously the decision didn’t go our way which puts a damper on it, but overall everyone in Texas was great and I hope to go back to America again.”