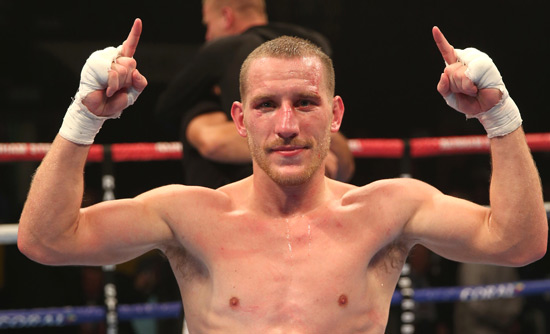 British Featherweight Champion Ryan Walsh returns to action on Friday 22nd January, 2016, when he headlines promoter Frank Warren’s first show of the year at the York Hall, Bethnal Green, in the first defence of his title.

Walsh created a piece of boxing history when he outpointed Samir Mouneimne to win the British title in September and join brother Liam, the current reigning British and Commonwealth Super-Featherweight Champion, as the first ever twins to hold the British title simultaneously.

The 29-year-old is now eager to get the first of his three British title notches – against a challenger to be announced – to make the Lonsdale belt his own property and also has ambitions to win the Commonwealth title and join Liam as a double-double champion.

“I’m ready to start a big 2016 and ultimately by the end of the year I’d like to have the British title as my own,” Said Walsh.

“Obviously other title opportunities may present themselves during the year, I’d love to get hold of the Commonwealth belt as well, seeing as Liam also holds the belt and we can create another bit of history by being the first twins to hold the British and Commonwealth belts at the same time, now that would something. I’d also love to go for the European title which would be a dream to win.”

“The featherweight division is great domestically and there are some good fighters in there. I believe that I could beat the likes of Josh Warrington now, I’d love to get revenge over Lee Selby one day as he’s got the one victory over me and I want to reverse that,”

“Right now I’m concentrating on January 22nd and retaining my title and once I know the identity of my challenger he’ll be my prime focus.”

Heading up the undercard, explosive Harrow Weald starlet Mitchell Smith, the Boxing Writers’ 2015 Young Boxer of the Year, will feature in an eight round contest, but he first fights on the mammoth December 19 show at the Manchester Arena when he defends his WBO Intercontinental Super-Featherweight title against George Jupp.

Erith super-bantamweight Lewis Pettitt makes his return to the ring in an eight-rounder after suffering a loss in his last fight against Bobby Jenkinson in a Commonwealth title challenge and is now raring to get back into championship contention again.

Red-hot super-welterweight Ahmet Patterson is on the verge of challenging for title honours next year in his new weight-class and the unbeaten talent from Dulwich keeps busy in an eight-round contest.

Dagenham lightweight talent Ediz Hussein competes in a six rounder and completing the undercard are some of the hottest young prospects in the country as the continue to develop their careers in 2016 in four round contests: West Ham super-welterweight Sam McNess; Chelmsford super-middleweight Billy Long; Chingford lightweight Archie Sharp; West Ham super-lightweight Ben Smith and Sidcup super-featherweight D.P Carr.

The Channel Of Champions, BoxNation, will televise live and exclusive on Sky 437/HD 490, Virgin 546 and Talk Talk 415.  Subscribe at www.boxnation.com  Or watch online at Livesport.tv and via iPhone, iPad or Android.