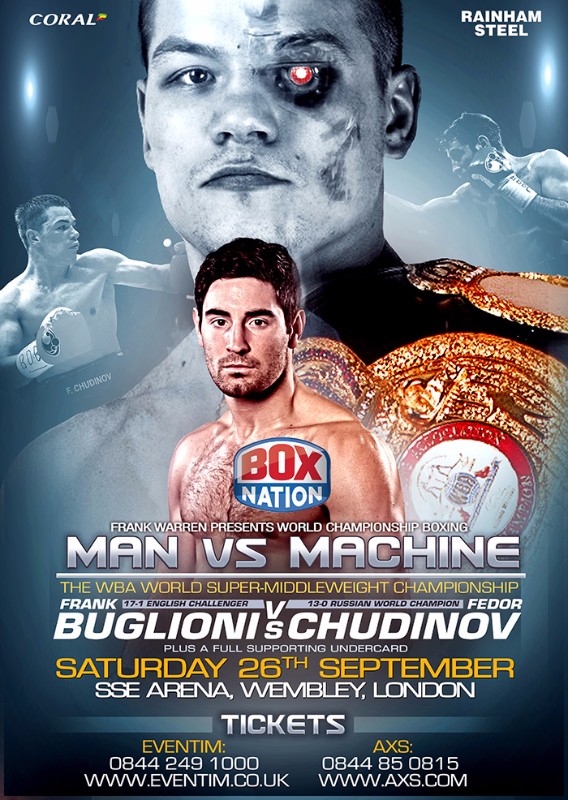 Frank Buglioni displayed his fighting heart by forcing WBA World Super-Middleweight Champion Fedor Chudinov the distance but lost by unanimous points decision at the SSE Arena, Wembley, and say’s he’ll be back.

Although he was roared on by a big home crowd and coming into the fight as the underdog, Enfield hero Buglioni put on a valiant performance, but the Russian was the better man coming away on the scorecards 120-106, 118-108 and 117-109.

Buglioni landed some good combinations in the early part, but Chudinov landed the cleaner and more heavy punches that were more eye-catching with a ram-rod jab and hard rights.

In the sixth round Buglioni showed his power by dropping Chudinov with a hard right hand after the bell to end the round. He was deducted two points by the referee at the start of the seventh. Buglioni stuck with Chudinov and was involved in some eye catching exchanges, but Chudinov stepped it up down the the final stretch.

“I had a fantastic opportunity for the world title and I gave it my best. I stuck it with one of the world’s top super-middleweights, but on the night he was the better man,” Said Buglioni.

“I’ll be back from this, it’s still early and raw, but I’ll go back to the drawing board and start again,”

“His punches were very correct and he had a good defence, he gets my respect, he’s a very good fighter,”

“While it’s hard to take defeat I believe that I showed my fighting heart and courage and I thank my loyal fans for their tremendous support.”

Unfortunately there was heartache for Erith’s Lewis Pettitt after he was stopped in the eleventh round by Lincoln’s Bobby Jenkinson in his challenge for the Vacant Commonwealth Super-Bantamweight Championship in an exciting fight.

The full results from a big night of boxing at the SSE Arena, Wembley: