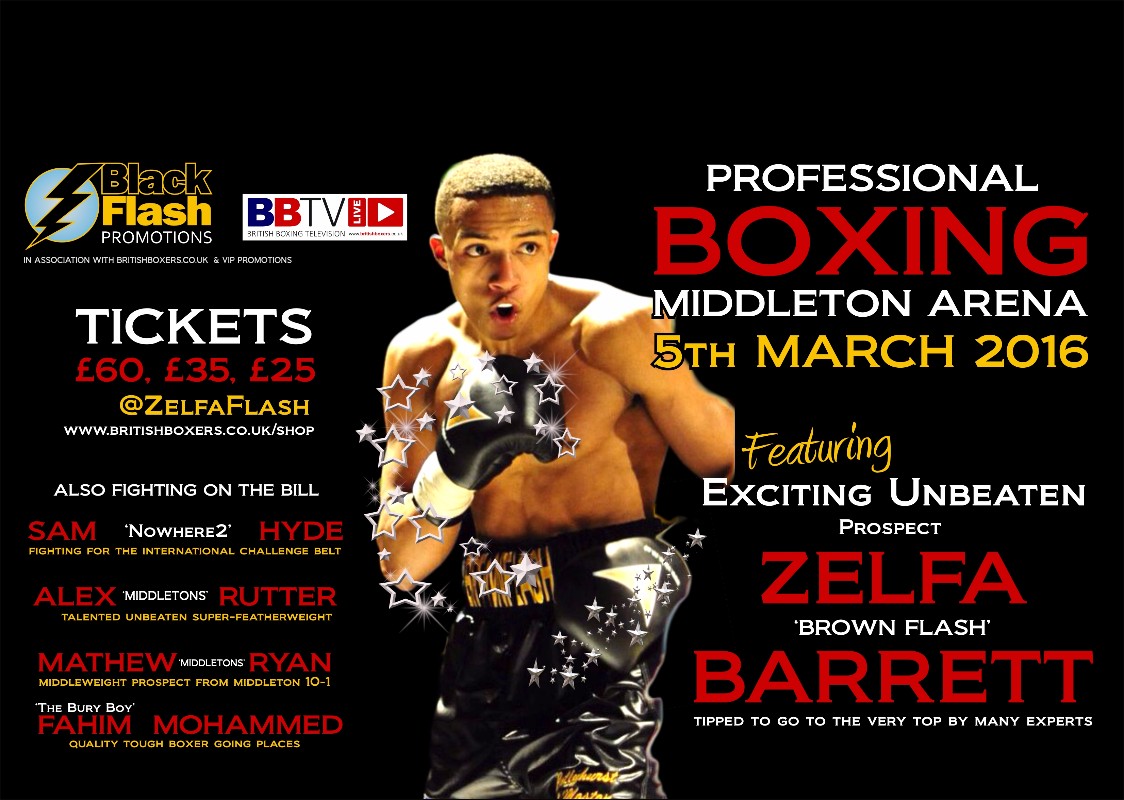 BBTV LIVE is back on March 5th when we screen our first title fight action on the latest Black Flash Promotion’s show at the Middleton Arena in Manchester.

The full show, featuring all unbeaten prospects, will again be free for everyone to watch online via this website’s live stream.

Topping the bill is Sale’s Sam ‘Nowhere2’ Hyde, who takes on tough Lithuanian Rolland’s Cesna for the vacant International cruiserweight challenge belt over 8-rounds and Hyde has promised a big performance for his army of fans.

Hyde, 22, a former ABA champion and top amateur is proving himself in the pro’s, as a force to be reckoned with and developing into one of the brightest young British boxing prospects around.

As a pro, Hyde is trained by former British champion Ensley Bingham, but started his boxing career at the same amateur club as Ricky Hatton, the Sale West ABC. Like Hatton before him, Hyde is a popular character and is becoming a big ticket seller in Manchester in his own right and he could just have the KO power and charisma to follow in the ‘Hitman’s’ footsteps.

Another popular unbeaten prospect starring on the Manchester card is the super talented Zelfa ‘Brown Flash’ Barrett who will face his first overseas opponent in Aron Szilagyi from Hungary in a match-up made at super-featherweight schedule for 6-rounds. Barrett has so far took on boxers naturally bigger than himself at lightweight and light-welterweight but will now campaign at his natural weight as he seeks to rack up the victories before aiming towards a domestic title chance.

Barrett, 22, trained by his uncle, former British and European champion Pat Barrett, (also the Black Flash promoter) is also lined up to fight the week after (March 12th) when he makes an appearance on the undercard of Terry Flanagan’s WBO world lightweight title defence against Derry Mathews at the Echo Arena in Liverpool.

Also on the bill…

Matthew Ryan – Popular Light-middleweight from Middleton who is back in action after a few months out with an ankle injury. Ryan will take on hardened journeyman, the 100+ fight veteran William Warburton in a Lancashire derby over 6-rounds.

Another local derby on the bill, that looks a very interesting match-up will be between two local Middleton lads, who live a stone’s throw from the venue. Aaron Michael Jnr and Darryl ‘Razor’ Sharp have asked for this fight to be made and Black Flash Promotions accepted. Both have sparred in the past and they have been described as ‘Tasty’ scraps! Both unbeaten, they respect each others ability but have an argument to settle and have arranged a side bet between them. Both are determined to win and have promised to give everything, with the victor pushing on and the loser having to rebuild.

Alex Rutter, 22, is an unbeaten featherweight from Middleton, who is also fighting in front of his own fans and looking to impress. A recent addition to the Collyhurst and Moston stable, Rutter is now trained by Pat Barrett and Paulie Da Silva and has the potential to become a future star in the 9-stone division.

Fahim Mohammed – ‘The Bury Boy’ is back in action and looking to put into practise the learning and hard work, he has been putting in during the gruelling gym sessions with Barrett and Da Silva recently. There are not many boxers who come from Bury, the obvious is Scott Quigg, the current WBA world super-bantamweight champion and one of British boxing best boxers. Quigg also started his career at the Collyhurst and Moston Boxing club under Barrett and Fahim hopes to follow in his footsteps and make his own way to the top as another star attraction from Bury.

Tickets to attend the show are still available HERE from £25

To watch the show live online via BBTV REGISTER HERE and we will email you the free video link on the morning of the show.