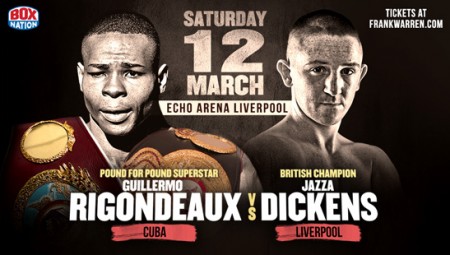 Pound-for-pound superstar Guillermo Rigondeaux shocked the world with the announcement he is to fight young Scouser James Dickens, in what is being described as a true “Rocky story”.

Here we look at what to expect come fight night.

The fight will take place on the undercard of Mancunian Terry Flanagan’s WBO world lightweight title defence against Liverpudlian Derry Mathews in a North-West derby matchup at the Echo Arena in Liverpool. The main event is a fight that has massive appeal but the fact Rigondeaux will be on the bill adds extra humph as fans look forward to watching the Cuban box in the flesh, although most in the arena will be rooting for the underdog..

Rigondeaux’s standings in the following pound-for-pound lists are: 4th ESPN, 5th Ring Magazine, 5th Sherdog and 7th Transitional Boxing Ranking Board, which just goes to show you how highly he is regarded in the boxing world.

It is little wonder then that “El Chacal” or “The Jackal” is one of the most avoided fighters in the the super bantamweight division. His devastating hand speed, lightening quick reactions and thumping shot power are enough to beat any fighter.

Even at 35, the Cuban shows no signs of ageing and should he come through this bout with a win, as expected by many, the winner of Carl Frampton and Scott Quigg must face the “champion in recess”.

His amateur record is impeccable, a two-time Olympic gold medallist for Cuba and his professional career is just as impressive; 16-0 with notable victories over Ricardo Cordoba, Nanito Donaire (despite being dropped) and Hisashi Magasa.

It seems then, such world class opposition would be no match for the little-known James “Jazza” Dickens. Tyson Fury described the fight as like a “lamb to the slaughter”, Jazza is a 10/1 underdog with most bookies and the general consensus on twitter is that the southpaw has no chance.

Dickens to beat rigo! See-no-evil monkey stop it I rate jazza but thats to deep https://t.co/DQVa2R2Dtx

These opinions are based on the fact Jazza’s best victories have come over Franklin Varela, Josh Wale and Martin Ward. The one blip on his record came at the hands of Kid Galahad, who could go on to win a world title in future, leaving Jazza at solid 21-1. (Galahad is currently serving a ban for using performance enhancing drugs)

The 24-year-old has shown tremendous bottle for taking the fight, something he should be applauded for and he will no doubt show great heart on the night.

It is the best of times, it is the worst of times.

This is no doubt the biggest fight of Jazza’s career but, it is one he seemingly can not win. Although, that is not to say it is impossible. “If you could ever excuse a fighter for employing dirty tactics, this fight could be the exception, but with this his introduction to the world stage Jazza may not want to taint his reputation.

He has a good repertoire of shots but his best chance of success could come if he roughs up his opponent: clenches, holds, rabbit punches, slaps, thumbs the eye, attack the hips, rub his head in and step on Rigo’s toes. It may not be pretty, it may not even be legal, but it just might work. From one Dickens to another:”

“To do a great right, you may do a little wrong; and you may take any means which the end to be attained will justify.”

Dickens is very religious and he will need God on his side for this one but, even that may not be enough. There is the worry that the home town “advantage” may in fact play into the hands of Rigondeaux, who will look to jab away on the outside of his ever frustrated and ever emotional prey. Should Dickens make even the slightest mistake he will quickly punished with crushing counter.

This match has similarities as to when Muhammad Ali gave local fighter Chuck Wepner the chance to fight for the world Heavyweight title in 1975, the true the inspiration behind the Rocky franchise. And in a world where fellow Scouser Tony Bellew is part of the Creed franchise, the Hollywood ending here doesn’t seem so far-fetched.

WATCH THE FIGHT LIVE ON BOXNATION