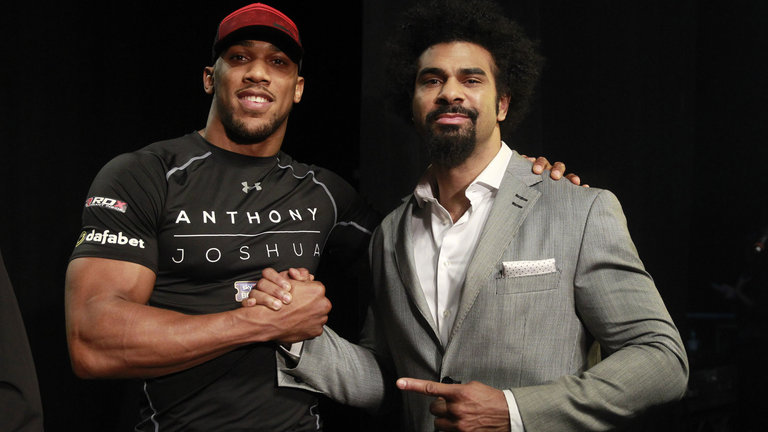 David Haye admits that somewhere down the line his path will cross Anthony Joshua’s and the two heavyweights will clash in a massive all British fight, possibly for a world title. Some will say, that part of Haye’s comeback plan contained processes, leading to a meeting with Joshua in-particular.

Haye the business man knows it is a big money opportunity for him not to miss, as he looks to attain his retirement fund while he still has time on his side.

The publicity and pre fight verbal jabs have begun a while ago and this morning Haye stoked the fire by insisting, if he were to meet Joshua he could potentially inflict a first round KO over a boxer who wasn’t even a pro, when the ‘Hayemaker’ was world champion.

Undefeated Joshua, 26, (15-0, 15KOs) from Watford first takes on IBF world title holder Charles Martin on April 19th, a fight that if he wins opens up doors with many opportunities behind them and Haye is just one. There is no doubt from a British perspective the public would love to see it happen, both are almost household names.

When asked how a fight between him and the current British heavyweight champion would go, Haye (27-2, 25KOs) said: “Oh, it might be a one round job.”

“I’m not saying it in a disrespectful manner to him, but when I hit people on the chin: they stay hit and then they hit the floor.

“I’m very fast, very agile and I punch hard; when you put those things together it’s an interesting one.

“He’s the young buck and I’m the old veteran. I’d love the opportunity to get in there and show him a couple of things.

“I do believe he’s the real deal, he’s had 15 knockouts in 15 fights, but I was heavyweight champion before he even started boxing. That shows the gap in experience.” Haye added in the BBC 1Xtra interview.

“He’s one of the best in the world and we’ll find out on April 19 just how good he is,” Haye continued.

“I’d love to get in the ring with him and see how good he is.

“If he wins his next fight I’m pretty positive there will be the public demand to get the two best British fighters in the ring.”