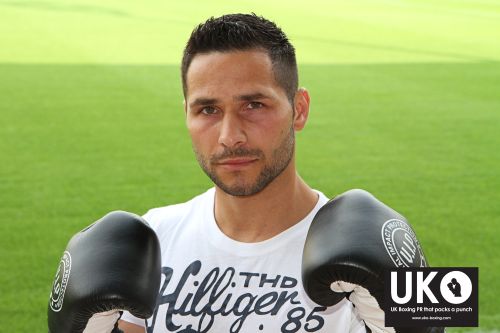 James Ready To Step Back In

James is mandatory challenger for the British Title, currently held by Liam Walsh, and know he cannot afford any slip-ups as he waits patiently for his chance.

“I am mandatory for the British title so this fight is a risky one for me,” he told www.uko-boxing.com. “If I were to lose then I would definitely lose my position, so it is vital that I get the win.

“But I am not going in there even thinking about losing because I have trained hard and I am raring to go.”

“I am not looking past Al Hamidi. I will have to be on the ball to get the win but if I do perform to my best then I am confident I will come away with the victory.”

The 32 year-old is looking forward to getting back in the ring after a lengthy spell out and believes he can overcome the back injury he has been plagued by. James hasn’t fought since that pulsating British Eliminator points win over Ronnie Clark in September 2014 but now, almost 18 months on, he’s ready to get back in the ring.

James features on John Costello’s Fight Network show at the Venue in Edgbaston alongside the likes of Birmingham’s Sean Davis and Coventry stablemate, Joe Sherriff.

“Training has gone very well so far. I had a persistent back injury last year but it is feeling good now and back to how it should be.

“I have changed my preparation slightly to make sure I don’t agitate my back again. Instead of the long road and track runs I was doing I have focused more on spinning and swimming to keep me in top shape. My sponsors have been brilliant and have helped me through this camp so thank you to Pro-Sil, Bore Off, Spon end tyres, JM Groundworks and We R Autos.

“I have fought in Birmingham a few times and I really enjoy going there. I haven’t fought at The Venue but it is a nice arena and there should be a great atmosphere. There will be a few Midlands lads fighting so the crowd should get behind them and make it a great show.”