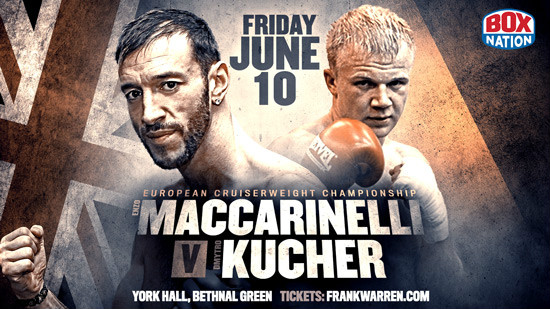 Enzo Maccarinelli fights tonight (Friday June 10) at London’s York Hall against Ukrainian Dmytro Kucher for the vacant European title and a win could line him up for a shot at WBC cruiserweight world champion Tony Bellew later this year.

Maccarinelli, 35, was a former WBO cruiserweight world champion, he defended his title four times before losing it David Haye in 2008.

Bellew claimed his own world title recently when he knocked out African Ilunga Makabu at Everton’s football ground to claim the vacant WBC world cruiserweight belt, is a friend of Maccarinelli, they like each other and there is a big respect. But friendships are something boxers sometimes have to look beyond in boxing and many times friends have clashed. It is something Maccarinelli’s promoter Frank Warren doesn’t see being a problem.

“All he wants is another shot at the world title, and then he can retire,” said Warren.

“All Enzo keeps on at me is he wants a world title fight, he says ‘I want one more go at it and then I’m out of the game.

“Friends fight, don’t they? We’ve seen that happen time and time again. Richie Woodhall and Joe Calzaghe were friends: when that bell went, Woodhall fought like never before.

“There’s no way Tony Bellew’s going to be beating David Haye any day of the week. Is he going to give all that weight away? I doubt it. Can David Haye get down? I don’t know.

“If it did, it’d be huge, but I don’t see what Tony Bellew has got to beat David Haye. I don’t think there’s any cruiserweights who’d be able to give that weight away.” added Warren.