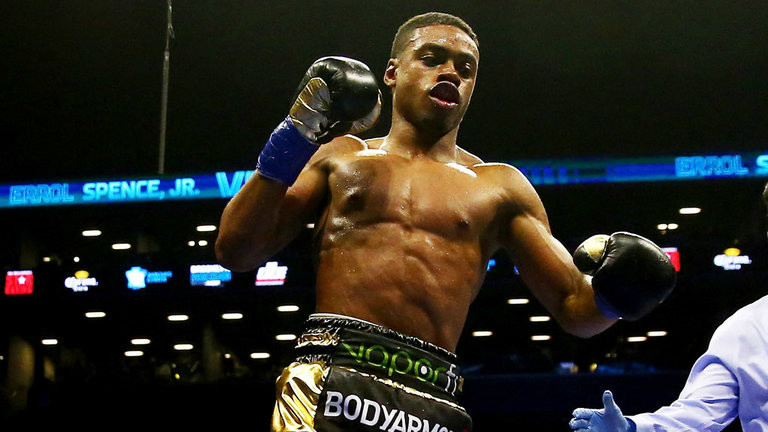 Errol Spence Jr. is hoping for a Hollywood ending when he fights Kell Brook on May 27 in Sheffield.

Spence will leave his home comforts and spend two weeks in the Steel City before making his walk to the ring at Bramall Lane as (mandatory) challenger for his much-anticipated fight with the reigning IBF welterweight champion.

“I expect a 100 percent Kell Brook, who shows a lot of heart and is fighting at home. He’s basically willing to put his life on the line to defend his belt and win in his hometown.”

The American will have to cope with all the negatives that comes with being the away fighter with, but is super confident that he will walk out victorious and with the cheers from a 20,000 plus crowd who in large will be on Brook’s side from the opening bell.

“I’m going in there like the gladiator,” said the 27-year-old from his training camp.

“I’m going into the lion’s den and trying to win. Going in there, trying to destroy my opponent and have the crowd cheering for me in the end, just like in the gladiator movies.”

The bookmakers can’t tell you whether the 2012 Olympian will “destroy” the Brit, but at time of writing they do have him down as the odds-on favourite to triumph in what will be his first world title fight.

“I know a lot of guys want to be the underdog, but it is what it is,” said the current 4/6 pick

“As the favourite, I’m going to go out there and do what I do, go about my game plan. That doesn’t change anything with how I’m gonna go about the fight. It’s good that people rate me that highly.”

The words world title and Errol Spence Jr has seemed like a perfect match since the New York-born southpaw entered the professional ranks in 2012. There appears to be very few chinks in his armour and most agree that it is when not if he becomes a world champion. However, Spence has had to play the waiting game for his opportunity and has vowed that this will be first and last time that he waits around for somebody.

“I want to fight another champ and unify the division. I want to be the undisputed welterweight champion of the world. That’s my dream. I want to hold all the belts like Roy Jones did in all those pictures and videos. I’m not sitting around waiting on anyone anymore…This is the first and last time I’m going to sit around and wait on somebody. When I have the belt, I’m going to defend it and fight, stay busy.”

As you might expect Spence is ready both physically and mentally. The challenger is chomping at the bit, excited to cross the pond and itching to take the belt from a man who has gone from facing a middleweight monster named Gennady Golovkin to fulfilling his mandatory duties against possibly the most feared 147lb fighter on the planet.

“I’m ready to come there and take something,” said Spence. “I expect a 100 percent Kell Brook, who shows a lot of heart and is fighting at home. He’s basically willing to put his life on the line to defend his belt and win in his hometown.”