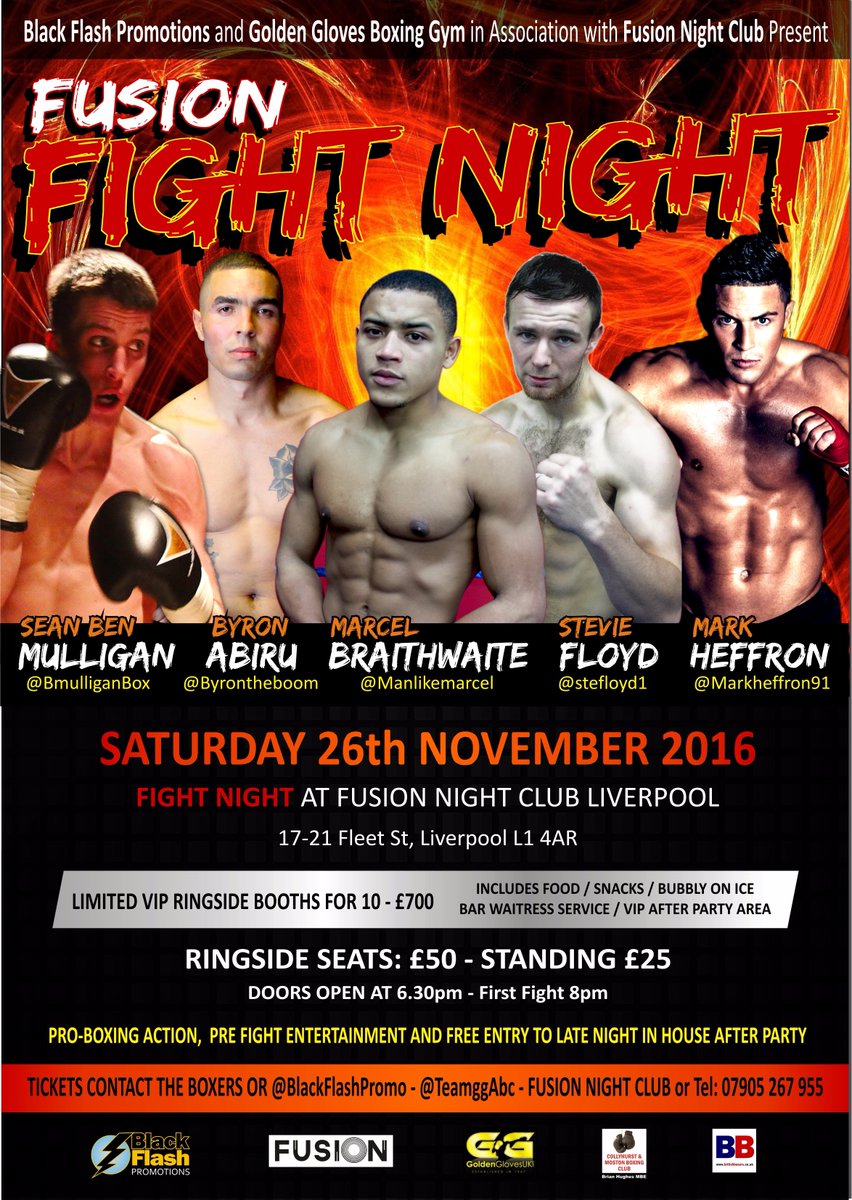 Hot off another stoppage victory last week in Manchester, big punching unbeaten super-middleweight contender Mark Heffron (12-0, 10KOs) will be action again next week when he stars on the Fusion Fight Night show in Liverpool on November 26th.

The show is in association with the famous Liverpool Golden Gloves Boxing Club and The Manchester based Collyhurst and Moston Boxing Club. The two fight clubs along with Black Flash Promotions, have joined forces to offer both Manc and Scouse prospects the chance to come together and train, spar and box on the same shows as they build their fledgling careers. Appearing on the show from the Golden Gloves will be the highly tipped debutant trio Marcel Braithwaite, Byron Abiru and Stevie Floyd, all products of Toxteth based coach Wayne Smith.

“This is an historic moment for the Golden Gloves Gym.” Wayne Smith informed British Boxers this week.

“The club was established in 1947 by an old seamen called Dougie Pomford. He brought the Golden Gloves name from America and the club has since produced countless top class boxers over the years and helped to give young people an outlet and direction in life.

“But this will be the first time in the clubs history that pro boxers will have fought under the clubs banner. Many top names have fought amateur for the gym over the years, such as John Hyland, Alan Rudkin, Georgie Turpin, Jazza Dickens and recent GB representative Anthony Fowler to name just a small few. But because the gym was only ever amateur, they had to move on to become pro. But now we will operate as a Pro-Am setup, so our amateurs won’t have to leave if they want to turn over they can do it with us, like Marcel, Byron and Stevie.

Collyhurst and Moston trained Heffron, 24, from Oldham, is ranked No 10 in the domestic 12st division and is considered as one of the most dangerous and avoided fighters coming through the ranks. Heffron’s KO record is impressive and what is more impressive is that 8 of his finishes have come in the first round, he doesn’t hang around and has an excitement about his work that commands your attention, don’t blink when Heffron steps through the ropes, chances are it won’t last long.

“I am really pleased to be fighting again so soon after my last fight.” Heffron told British Boxers.

“My career has been stop start since I turned pro at eighteen, so to now have two fights back-to-back and other fights lined up for next year, it is great and I can’t thank my new trainer Pat and Black Flash Promotions for helping me get my career off and running again and I am ready to put on a show for all my fans who are coming over to Liverpool to watch me. I have lots of friends in Liverpool and it is great to be fighting in a city I really enjoy visiting, I can’t wait.”

Another tasty addition to the bill is unbeaten welterweight prospect from the Collyhurst and Moston, Sean Ben Mulligan (5-0) – Mulligan has been likened to a young Ricky Hatton, such is his come forward, body punching crowd pleasing style. – Mulligan who is a massive Hatton fan has obviously watched a lot of the ‘Hitman’ and if he continues progressing at the rate he is then there is no reason why he cannot follow in his heres footsteps.

“I am really cuffed to be on this Liverpool show.” Mulligan said. “My last fight was at the Manchester Arena on the night (Anthony) Crolla won his world title in May and it has been too long that to wait.

“I want to be a busy fighter but other issues and injuries have blighted me recently. I am now fine, training hard, injury free and ready to kick start my career. I have family in Liverpool who are looking forward to me fighting there and my mates and fans from Manchester are looking forward to getting the coach over for the boxing and then a good night out afterwards. And I plan on putting on a great performance for everyone who is supporting me and coming to the fight, I can’t wait for this.”

Limited Tickets are still available through the boxers or @BlackFlashPromo

Includes Entry to Private bar and late night club party after the boxing.